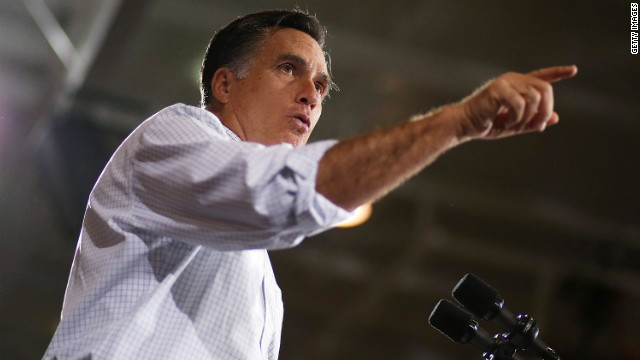 Avon Lake, Ohio (CNN) - Mitt Romney made a public foray into behind-the-scenes campaign strategy Monday in Ohio, urging his supporters to help him win the expectations game in the days before the election.

The candidate has been encouraging audiences to vote early, saying that would free them to help others get to the polls on Election Day. But in a short speech to an overflow audience in Avon Lake, Ohio, Romney peeled back the curtain and explained to voters why their early vote could help his effort.

"It sends a very strong message, by the way," he said about voting early. "I mean, I know your vote counts just as much if it's cast on Election Day as if it's cast early. But when it's cast early, all the media follows how much early voting is going on, and they look at your zip code and where you live and make an estimate of whether you're a Republican or a Democrat, and they decide whether we're ahead or we're falling behind."

"And we're doing well right now, so early voting makes a difference," Romney continued. "It helps us, it's you know, a little extra boost when we need it, so thank you for doing it."

One element that could muddy the waters: in Ohio, voters are identified by the party for which they last cast a primary vote - so any voter who weighed in on the contested Republican primary earlier this year would now be identified as a Republican.

Romney's campaign has been highlighting increasingly tightening polls in Ohio, which they present as proof the GOP presidential nominee is benefiting from a surge in momentum in the state where Obama has long held an advantage.

In a memo released to reporters Monday, the Romney campaign's Ohio state director sought to cast doubt on the president's effort.

An Obama official said the rival campaign was ignoring facts on the ground in an effort to paint their campaign as on the upswing.