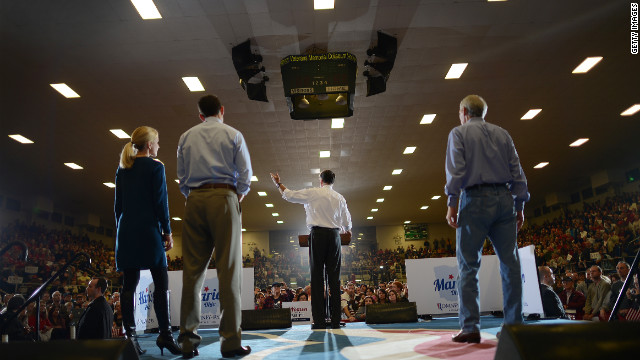 Romney's closing argument a picture of 'day one'

(CNN) – Mitt Romney's final message will focus on tasks he hopes to take on his first day in office if elected president, according to an outline of the themes that was provided by a senior Romney adviser.

"Throughout this campaign, Governor Romney talked about his 'Day One, Job One' approach to fixing the American economy. Now, as we close out the final days of this campaign, Governor Romney will return to this theme and use each day to talk about specific steps in his plan that will bring about 'real change on day one' in a Romney presidency," the plan reads, leading into bullet points on specific issues Romney will hit in the eight days before November 6.

"The governor's message in these final days will be an optimistic one, focused on building a brighter future and focused on the big issues that Americans want their president to confront and develop solutions for," the note from the senior Romney adviser read.

The points Romney will hit are:

-Make the case for fundamental tax reform designed to help boost the middle-class and American competitiveness in the global marketplace.

-Talk about his plan to put the country back on track towards a balanced budget.

-Once again lay out his plan to reverse President Obama's cuts to our nation's military through sequestration.

-Describe his plan to expand trade and increase U.S. exports and also level the playing field with China by declaring them a currency manipulator.

-Explain his plan to achieve energy independence for North America.

-Focus attention on a comprehensive effort to fix our nation's schools and raise performance levels.

-Talk about his effort to halt the layers of new regulations, starting with Obamacare, introduced by President Obama that have burdened America's job creators.

Speaking on CNN's "State of the Union" Sunday, senior Obama adviser David Axelrod said the president's closing message was focused on telling voters why he needs four more years in the Oval Office.

"The president's closing message is exactly what I said before, which is we've made some progress," Axelrod told chief political correspondent Candy Crowley. "We have to build on that progress, and we have to move forward in a way that builds an economy that works for the middle class. What we can't do is go back to the failed policies of the past."