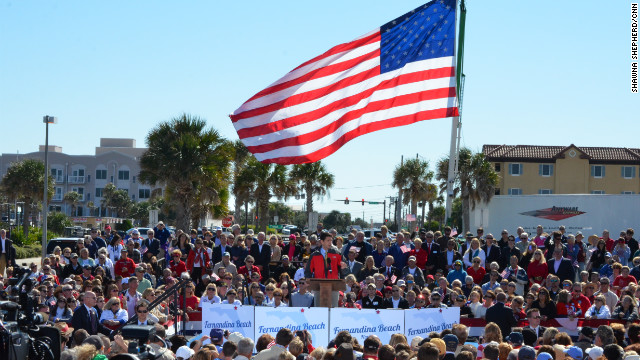 Fernandina Beach, Florida (CNN) – Paul Ryan said at his only political event of the day that he and Mitt Romney are staying in touch with regional leaders and offering assistance to those impacted by Hurricane Sandy.

"Let's send our prayers and our thoughts to the people in the Northeast. Look, Floridians, you are no stranger to big storms. You know better than anyone on the need for communities to come together and for neighbors to help one another," Ryan said Monday afternoon.

He continued, "Mitt Romney and I, we are staying in touch with regional leaders. We are offering assistance. We are collecting storm relief supplies in our field offices in Virginia, Pennsylvania, New Hampshire, up and down the Eastern Seaboard."

The Republican vice presidential nominee was on a flight to Florida when the presidential campaign announced it was canceling a number of events Monday and Tuesday out of sensitivity for the millions of Americans in the path of the storm.

He was scheduled to attend three campaign events but Ryan ended up having just one. At the sunny outdoor rally just north of Jacksonville a large sign that said "We need a real recovery" displayed at most events was removed from behind the stage before he arrived. The space was replaced with rows of people and a large flag that was hoisted in the air by a cherry picker forklift.

The vice presidential nominee recommended making a donation to the Red Cross and encouraged people to visit Romney victory centers where they are packing supplies for people in need.

"We know how to help each other in this country. If you have friends and family in the path of the storm, make sure you call them. Make sure they listen to the warnings, make sure they check on their elderly neighbors," Ryan said. "Let's do what we need to do to help them get through what is coming their due – what is coming in their way – and let's not forget the fact that this is the greatest country on the face of the Earth."

Romney's running mate will now travel to Wisconsin, his home state, where he is scheduled to campaign later this week.