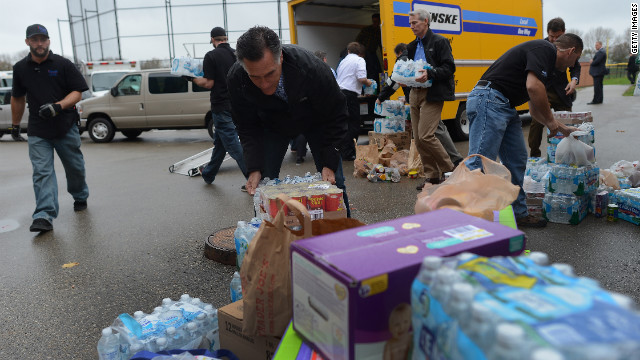 At Romney storm event, some donations supplied by campaign

(CNN) – Scores of supporters turned up to Mitt Romney's rally-turned-storm relief event in Ohio Monday with supplies to donate to survivors of Superstorm Sandy, but the candidate's campaign was prepared with supplies of their own in case people arrived empty handed.

Among the neat rows of canned food, bottled water and diapers were supplies purchased by Romney staff and volunteers, filling out what could have been an embarrassing photo-op for the GOP nominee.

"Our campaign, our staff and our volunteers did purchase and donate relief supplies so that they could be sent to a Red Cross center in the area affected by the storm. We don't have a cost assessment on it, but we were definitely grateful for everyone's help and we are happy to do our part for the relief efforts," Rick Gorka, a Romney campaign spokesman, said Wednesday.

The event, which was originally meant to be a campaign rally but was changed to a "storm relief event" on Monday evening, was held in a high school gymnasium in Kettering, Ohio. The high-profile supporters originally meant to campaign with Romney at the rally – racecar driver Richard Petty and "Alabama" lead singer Randy Owen – were both at the relief event, and Romney described the donations from the crowd as a "cover charge" for seeing Owen perform.

"We have a lot of goods here, and I know there's more coming in," Romney said in brief remarks delivered at the beginning of the event. "We're going to box these things up in just a minute and put them on some trucks, and were going to send them to into, I think it's New Jersey, as a site that we've identified that can take these goods and distribute them to people who need them."

"We won't be able to solve all the problems with our effort this morning," Romney continued. "There will still be a lot of people looking for goods even though we've gathered these things, but I know that."

After his remarks, Romney stood and accepted donations from the crowd of supporters for more than a half an hour.

He later walked outside to load crates of water onto a truck. Romney's campaign told reporters that a Red Cross warehouse in New Jersey was accepting the donation, despite a statement on the charity's website saying they "do not accept or solicit individual donations or collections of items" because processing them requires resources better used on other projects.

"The American Red Cross appreciates the support from the Romney campaign and is working with the campaign to process this donation of supplies," the statement read. "We are grateful that both the Obama and Romney campaigns have also encouraged the public to send financial donations to the Red Cross. We encourage individuals who want to help to consider making a financial donation or making an appointment to give blood."

At his event, Romney encouraged supporters to donate money to the Red Cross, and his campaign said Wednesday he himself had personally donated to the group. They did not divulge the size of Romney's contribution.