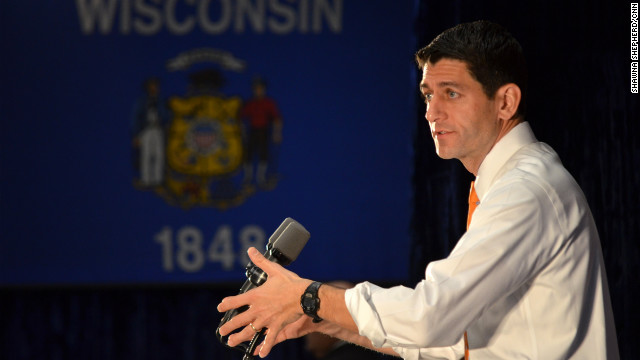 Back on the stump, Ryan focuses on 'different direction'

When the Wisconsin lawmaker and vice presidential nominee kicked off the first of three rallies in his home state he focused less on their Democratic opponent – who will spend the day surveying Sandy-ravaged areas of New Jersey with Republican Gov. Chris Christie – and more on what the Republican ticket would do if they were elected in six days.

"I tell you what, Wisconsinites we're problem solvers. We don't care who gets credit, we just want to fix things," he said before an audience of 1,000 people in Eau Claire. "And so when you take a look at the challenges on our horizon one of the reasons why our businesses aren't hiring, one of the reasons why we have 23 million people struggling for work, one of the biggest reasons we have 15 percent of Americans in poverty today is because our economy is not growing, because there's a massive amount of government-imposed uncertainty plaguing our economy. On day one we're going to fix that. On day one we're going to go in a different direction."

Ryan, who has served in Congress 14 years and is chairman of the House Budget Committee, faulted both political parties for making "lots of empty promises for years to get re-elected," resulting in an increasing federal debt that is hurting the nation's economy.

He said, "Problems have been building and mounting in Congress and in Washington and they need to be solved. What we need is somebody who gets out of bed every morning thinking about how do I solve these problems, who do I talk to, how do I bring people together. How do I break the Gordian knot of gridlock in Washington, how do I run at our country's problems instead of running away from them?"

On Tuesday, the Republican presidential nominee and his running mate set aside their usual stump speeches and instead welcomed donations of storm-relief supplies from supporters. In Wisconsin, Ryan thanked volunteers at victory centers in La Crosse and Hudson who collected supplies that were headed to a Red Cross center in New Jersey.

Ryan held one rally in Florida instead of three that were scheduled on Monday before the storm made landfall.

With less than a week to go until Election Day, Ryan encouraged voters in his native Wisconsin to take advantage of early voting and absentee in person so they can "spend the weekend talking to friends, talking to relatives, talking to neighbors, making sure people go to the polls."

"But being that we're here near the banks of the Mississippi, not too far from there, we've had our share of natural disasters, but we don't have hurricanes. We've turned on the TV and we've seen the devastation. Let's keep the people of the Northeast in our prayers today," he said.

Ryan will hold rallies in Green Bay and Racine before he goes home to go trick-or-treating with his three kids in Janesville.