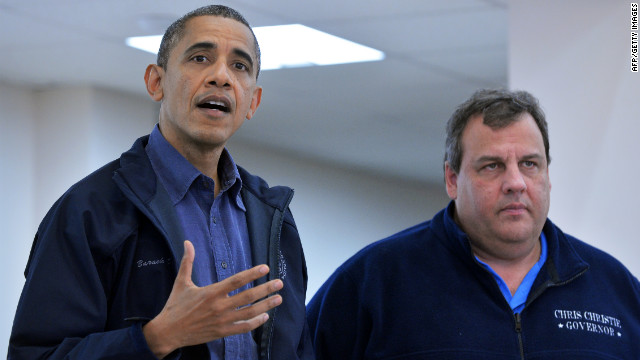 JUST IN: OBAMA, CHRISTIE TOUR STORM RAVAGED JERSEY COAST… "I cannot thank the president enough for his personal concern and compassion for our state and the people of our state," New Jersey Gov. Chris Christie tells reporters after surveying Sandy damage on Wednesday in Brigantine.

TRAIL TRIVIA
(Answer below)
Under what administration did the first White House Halloween party – an event described as “the most interesting party ever given in the dignified setting of the White House” – occur?

In the closing six days of a campaign that the Center for Reponsive Politics prices at a whopping $5.8 billion, the humanity of two partisan enemies shaking hands at the bottom of the Air Force Once struck a chord.

Barack Obama and Chris Christie, the political power couple of the news cycle, put the United States first today and it was hard not to notice in this hyper-partisan atmosphere. Yes, battleground polls still reminded us of the tight race in the final days of this campaign. Local newspapers still discussed the latest auto industry claims from both campaigns, which candidate was leading in early registration and campaign rallies in their respective states. But none of it seemed to matter for a few hours as the nation witnessed the tour of destroyed homes and towns.

We asked Alex Castellanos, a master of political imagery, how much today's news cycle had to sting the Republican ticket.

"In stormy seas, people tend to cling to the life-raft they are on," Castellanos wrote in an email to Gut Check. "The more uncertain the moment, the less likely people are to pile more uncertainty on top of it and vote for change. National crises like these usually benefit the incumbent."

For Obama, the photo-op is priceless days before the election. But Christie, too, has something to gain, as we noted in Monday’s edition. While his approval rating is in the 50s, the politically astute governor knows when to put his state before any national ambition he or his party may have - if you need any more proof of that, go re-read the transcript of his "keynote" address to the Republican National Convention just two months ago. Gut Check favorite Mark Leibovich described it in these terms: “Chris Christie, It's Not All About Him, He Said Often.”

In a tight playing field, and in this hyper-paced media environment, much can still happen. Castellanos for one still believes that the damage to Obama's re-election energy was already done, "It may turn out that the bigger storm to hit the Obama campaign was Benghazi a couple of weeks ago. And it may have washed away a lot of Obama's strength."

Leading CNNPolitics: Anti-Obama mail piece: ‘We are no longer a Christian nation’
Focus on the Family, the Colorado-based social conservative organization founded by evangelical author and radio host James Dobson, is targeting Iowa voters with a mailing that quotes President Barack Obama as saying “we are no longer a Christian nation.” The fold-out brochure, which landed in Iowa mailboxes last week and was provided to CNN by a Des Moines-area voter, draws a series of contrasts between Obama and Mitt Romney on the issues of abortion, same-sex marriage and insurance coverage for contraception. – Peter Hamby

Leading HuffPo: Holding The Line
With less than a week remaining before results are counted, the presidential race remains remarkably close, with President Barack Obama maintaining a very narrow lead in most polls over Republican nominee Mitt Romney in Ohio, the state whose outcome could well decide the election. A new Ohio poll released on Wednesday morning by CBS News, The New York Times and The Quinnipiac University Polling Institute showed Obama maintaining a five percentage point advantage over Romney in Ohio, the same margin as on a previous CBS/Quinnipiac survey conducted in the state two weeks ago. – Mark Blumenthal

Leading Politico: 1 week, 2 versions of reality
As if Hurricane Sandy weren’t doing enough to muddle the presidential race a week before the election, the two campaigns now seem to be embracing two sharply different versions of political reality. – Jonathan Martin

Leading The New York Times: Ohio Working Class May Offer Key to Obama’s Re-election
As President Obama and Mitt Romney enter the closing week of the presidential race, where the 18 electoral votes of Ohio are seen by both sides as critical to victory, Mr. Obama’s ability to prevent erosion among working-class voters may be his best path to re-election. – Jeff Zeleny

- Romney tones down partisan rhetoric, Romney courts ‘single moms’ -
MITT ROMNEY AT A CAMPAIGN RALLY IN FLORIDA: “I think of all the single moms across America, all the single moms that are scrimping and saving to make sure they have good meal on the table at the end of the day for their children. And think of the moms and dads who have two jobs right now, or one has a day job and one has a night job, they hardly see each other, and why? So they can buy the clothes for their kids that won’t make their kids stand out at school. I think of all the parents at Christmas time, last year and probably this year who are saying to each other ‘lets not exchange gifts so we have plenty to give to our kids.’ This is the American character.”

- Forecasting victory, Ryan paints rosy picture of ‘Wednesday morning’ -
PAUL RYAN AT A CAMPAIGN EVENT IN WISCONSIN: “I’ll tell you what: Wisconsinites, we are problem solvers. We don’t care who gets credit, we just want to fix things. So, when you take a look at the challenges on our horizon, one of the reasons why our businesses aren’t hiring, one of the reasons we have 23 million people struggling for work, one of the biggest reasons we have 15% of Americans in poverty today is because our economy is not growing because there is a massive amount of government-imposed uncertainty plaguing our economy. On day one, we are going to fix that. On day one, we are going to go in a different direction. So, this is Wednesday morning. Think about next Wednesday morning.”

–Meanwhile, Team Obama says its Math vs. Myth -
JIM MESSINA, OBAMA CAMPAIGN MANAGER, ON A CONFERENCE CALL WITH REPORTERS: “We have the math and they have the myth. Whether we're talking about getting out the vote or bringing down the deficit- our numbers add up. The Romney team is trying to sell illusion and delusion.”

- This has to be the first ‘animal spirits’ mention of the election -
JEB BUSH AT A CAMPAIGN RALLY IN FLORIDA: “Job one on Day One will be to restore sustained economic growth for our country. It will lift the spirits of America if people believe that they can invest in their own dreams, that there is the chance that they can get an education and be able to get a job, that they can get the job maybe that they lost two years ago. It will lift our spirits and the animal spirits of America will come back as well and we will be able to take care of ourselves rather than getting in line and looking for a hand out from some government entity. That’s not the America that we know.”

Gut Check Full Service: CNN’s Christine Romans tells us that “Animal Spirits” is an economic term that is at the heart of western capitalism; they are the "je ne sais quoi" of human behavior that make us turn from scared to confident, prudent to risky. John Maynard Keynes coined the term to “describe human emotion that drives consumer confidence.”

- Biden already looking ahead to 2016? -
WHILE TALKING TO A REPUBLICAN VOTER ON THE PHONE, VICE PRESIDENT JOE BIDEN LOOKS AHEAD FOUR YEARS: “I'm not trying to talk you into voting for me, I just wanted to say hi to you. Ok? And after it's all over when your insurance rates go down, then you'll vote for me in 2016.”

Jessica Yellin (@YellinCNN)
Dept of Labor: unemployment report will be released on schedule, 830am friday. Despite #sandy.

Sam Stein (@samsteinhp)
Romney campaign does not have an office in Minnesota http://mi.tt/VDuqmC (amazing that it's this close w/o any ground presence)

Boston.com News (@BostonDotCom)
NO FINAL BROWN-WARREN REMATCH: A planned 4th and final debate in contentious US Senate race will not be rescheduled. http://bo.st/Uf6Yv1

According to White House Historical Association, the Eisenhowers had the foyers decked out in shucks of corn and had decorative witches and goblins peaking out around the house.

Mrs. Eisenhower also hosted a Halloween party for the wives of White House staff members. According to accounts of the event, Mamie had the State Dining floor decorated with “ghosts, goblins, spider, skeletons and cobwebs” and “Woolworth paper skeletons hanging from the chandelier, paper black cats and witches placed around the tables and carved pumpkins as centerpieces.”

The Obama’s have also been known to partake in the Halloween festivities. In 2009 – the first couple’s first Halloween in the White House – Michelle Obama dressed up in a catwoman costume – complete with ears and whiskers – and handed out candy to around 2,000 kids.

Due to Superstorm Sandy, the Obama’s 2012 Halloween festivities have been cancelled.

Gut Check Correction: In the October 22 edition of Gut Check, we incorrectly said that Washington University was the host of the famous 1992 town hall debate. The ever vigilant Professor Larry Sabato – who was at the debate – pointed out to us that the debate actually took place at the University of Richmond. Please keep us honest and email gutcheck@cnn.com if we get anything wrong.