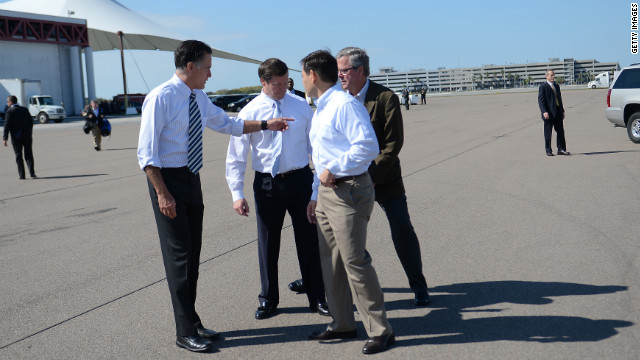 Tampa, Florida (CNN) - At a campaign stop kicking off a swing through Florida for Mitt Romney, the state's former governor Jeb Bush appeared to take a dig at all of the attention paid to the Obama administration's response to Superstorm Sandy.

"My experience in all this emergency response business is that it is the local level and the state level that really matters," Bush said to a crowd of supporters gathered in a Tampa airport hanger.

"That if they do their job right the federal government part works out pretty good," Bush continued.

Continuing the positive tone he set for his campaign at a storm relief event in Ohio Tuesday, Romney steered clear of his usual stump speech attacks on President Obama.

The GOP nominee called on his supporters to donate to the Red Cross, "if they have a dollar extra."

Romney campaign aides confirmed the Republican candidate made his own personal contribution to the charity on Monday. However, the campaign did not specify the amount of the donation.

In his remarks in Tampa, Romney attempted to tie the nation's response to Sandy to Election Day, saying voters should also "come together" to remove President Obama from office.

Joining Romney and Bush on the campaign trail was the state's popular U.S. Senator Marco Rubio. Sticking to what appears to be a concerted effort by the campaign to avoid negative rhetoric, Rubio told the crowd that the current state of the economy does not have to be "the new normal."