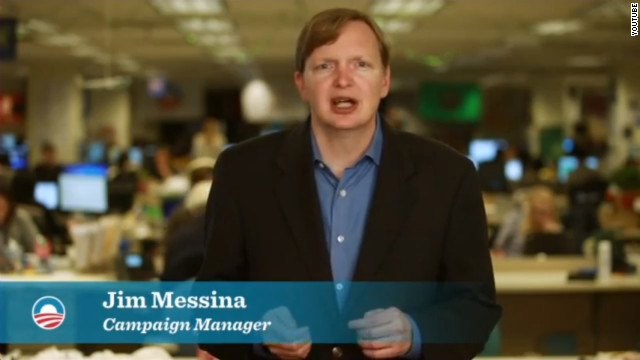 (CNN) – President Barack Obama's campaign manager continued his confidence push in a web video released Wednesday, telling supporters the incumbent Democrat was ahead of his rival in key battlegrounds, and would win the election if "we do what we need to do" on Election Day.

Jim Messina, speaking to the camera, ticks through similar reasoning he used on a conference call Monday, saying leads in early voting and increased voter registration have put Obama in a better position to win on Tuesday.

"You have put President Obama in the dominant position in this race," Messina says in the video.

Ticking through individual battlegrounds, Obama's campaign chief cites polls and early voting numbers as indications of his team's advantage. Democrats generally outpace Republicans in early voting, however, and while results show Obama with the advantage in some states, Republicans are ahead in others.

On Tuesday, official early voting figures showed more Democrats have cast their ballots already in Nevada, while more Republicans have done the same in Colorado.

In the key battleground of Ohio, Messina says in the video that early vote turnout in precincts that went for Obama in 2008 is higher than in precincts that went for Sen. John McCain. Republicans, however, say they're outpacing their 2008 early vote effort in Ohio, and predict their performance on Election Day itself will outweigh any Democratic lead in early ballots.

He doesn't mention states where polls have suggested a tightening between Obama and Romney, including Minnesota and Pennsylvania – two states that seemed a sure thing for Democrats earlier this fall. The Obama campaign recently began airing ads in both states to counter commercials from Romney and his allies.

"President Obama is playing defense in states that were once considered safely in his column. If the other side was on the move, they would be expanding into states that John McCain won in 2008; instead, they're fighting to maintain turf in traditionally Democratic states."