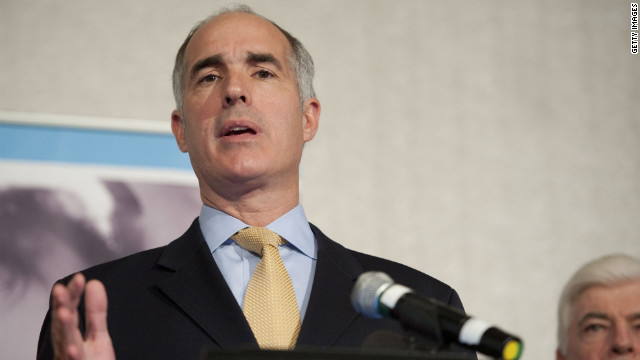 The spot, which SBA is spending $50,000 to run, says Casey's vote in favor of President Barack Obama's health care law contradicts his position on abortion.

"Bob Casey Jr. says he's pro-life but Casey Jr. voted for Obamacare, the largest expansion of abortion in U.S. history, even forcing churches to pay for abortion-inducing drugs, against their religions belief," the narrator says.

Outside Republicans have increasingly been seeking an opportunity in the state, and GOP presidential nominee Mitt Romney's campaign recently announced an ad buy, their first in the state this year. The non-partisan Cook Political Report says the race leans in Casey's direction and the Rothenberg Political Report says the race favors Casey's re-election.

Republican challenger Tom Smith has raised $20 million and spent $17 million, while Casey has brought in only $9 million and so far spent $5 million, according to Federal Election Commission Data.

Regardless, a recent poll in the Keystone State showed Casey leading his challenger among likely voters 48% to 39%. The Franklin and Marshall College poll, conducted between October 23 and 28, had a sampling error of plus or minus 4.2%.

Abortion issues have also proved problematic for Smith. At an August campaign stop, he was explaining his opposition to abortion, including in cases of rape, when asked a hyothetical question about a family member being raped, according to a report by The Philadelphia Inquirer.

"I lived something similar to that with my own family. She chose life, and I commend her for that. . . . Don't get me wrong; it wasn't rape," he said. Pressed if he was comparing equating a single mother's pregnancy with a rape victim's pregnancy, he insisted they were not, according to the paper, then added, "But, well, put yourself in a father's position. Yes, I mean, it is similar."

He later told reporters that he was not comparing the two, the Inquirer said.