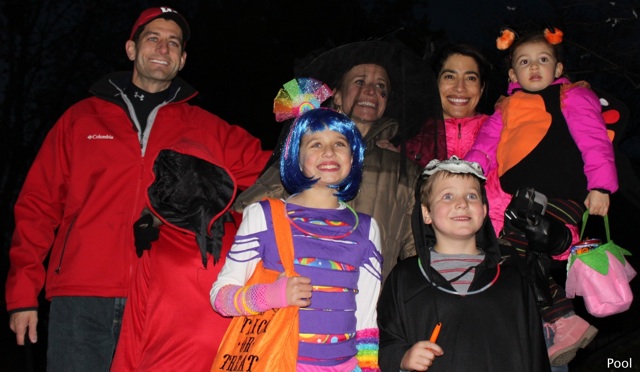 Politics can’t scare off Ryan from his appointed Halloween rounds

On Wednesday, Mitt Romney's running mate held three rallies in his home state before he and wife, Janna, returned to Janesville to spend Halloween with their three children.

“We will go trick-or-treating on the same route we go every year, which is the same route I went on when I was a little guy," Ryan said earlier in Racine.

Ryan's 10-year-old daughter, Liza, donned a blue wig and dressed up as a tamer version of pop singer Katy Perry, who recently performed at a fundraiser for President Barack Obama.

Unrecognizable in a red cape and black mask, 9-year-old Charlie dressed up as the Unknown Phantom. Grim Reaper, 7-year-old Sam, included a scythe that his dad carried around so his son could collect candy.

Janna Ryan wore a witch's hat but her husband appeared to be dressed up as an everyday Wisconsin dad. Ryan wore the same red University of Wisconsin jacket he had on earlier in the day but added a Badgers hat to his trick-or-treat ensemble. Joining the family was Ryan's sister-in-law Zoe, married to brother Stan, and their 2-year-old, Zaydee Mae Ryan, dressed up as a butterfly.

This year, reporters and campaign staff accompanied the Ryan brood down Jefferson Avenue, a street he frequented as a kid.

Now, with a cadre of reporters and campaign staff, Ryan's personal aide, Jake Kastan, also took part in the fun. Early on in the campaign, Ryan's youngest son, Sam, began calling him "chicken butt." Kastan joined in on the fun, surprised the kids and dressed up in a yellow chicken suit.

"You guys know why he has this suit on don't you? Because Sam calls him ‘chicken butt,’ " Ryan said with a laugh as he and Janna posed for a picture with his personal aide.

When reporters followed Ryan's clan to the last house, they asked the vice presidential hopeful to comment on the latest poll numbers in Wisconsin.

Ryan brushed off the question, "We're not doing questions."