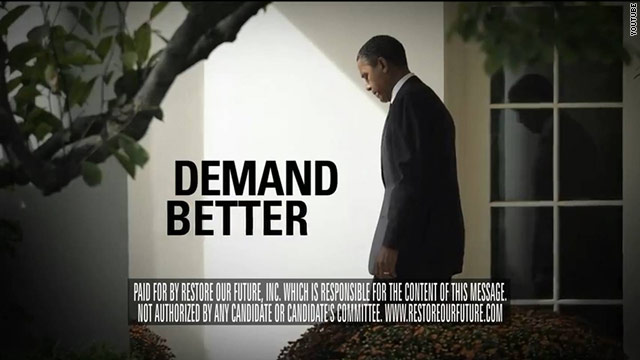 (CNN) – Restore Our Future, a super PAC backing Republican nominee Mitt Romney, is going up with $1.8 million worth of ads in Minnesota and New Mexico – states that have been considered safe bets for Democrats.

The super PAC announced Wednesday it would spend $1.1 million in Minnesota and $700,000 in New Mexico.

The buy will rotate between two, 30-second ads: "New Normal," which hits President Barack Obama's economic policies for the ailing economy, and "Saved," a positive ad what highlights Romney's search for a business partner's daughter who went missing in New York City.

New Mexico has five electoral votes and Minnesota has ten. Both states have been thought to be in Obama's column, but a recent poll suggests a tightening race in the State of 10,000 Lakes.

A Star Tribune survey conducted from October 23-25 and released Sunday showed Obama with a three point advantage over Romney among likely Minnesota voters – 47% to Romney's 44%. Obama's advantage is within the survey's sampling error. But, a St. Cloud State University survey of likely Minnesota voters, taken from October 15-21 and released Friday, showed Obama with a larger, eight point edge over his Republican challenger - 53% to Romney's 45%. Obama's advantage in the SCSU survey is also within the poll's five point sampling error.

In New Mexico, however, the president leads 50% to Romney's 41%, according to a poll conducted for the Albuquerque Journal from October 23-25. Obama's lead is outside of the poll's 3.5 sampling error.

While Republicans see Minnesota as showing signs of Republican growth, Democrats bill the ad push as a ploy to suggest a tightening race where there is none.

Obama senior adviser David Axelrod told reporters on a conference call Wednesday they see Minnesota and various other states, like Michigan and Pennsylvania, where Republicans have bought ad time as safe but will cede no state to the Romney campaign.

"We are very, very confident based on the number we have that we're gonna carry Michigan, that we are gonna carry Pennsylvania and that we're gonna carry Minnesota," said Axelrod. "What's going on here is I think there's a growing recognition on the other side Ohio is fading away and that there, as Jim said, is no battleground state where they can be comfortable so they're looking for opportunities here as far-fetched as they might be."

With six days until Election Day, Restore Our Future treasurer Charlie Spies sees the momentum on Romney's side and an expanding electoral map for the GOP.

"The Obama campaign has been forced to advertise in Pennsylvania and Michigan, and Bill Clinton, the top Obama surrogate, has been sent to campaign in Minnesota," said Spies. "Now polls show a tightening race in New Mexico. Minnesota and New Mexico understand the choice before America on Tuesday and Mitt Romney's clear vision to balance the budget, empower small businesses and protect individual freedoms is resonating."