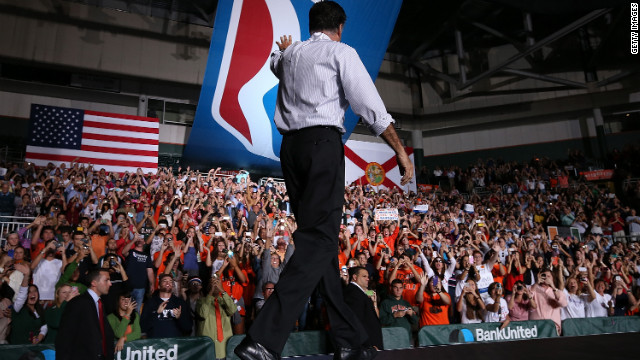 Romney, Obama camps war over 'state of the race'

(CNN) - Who has the momentum in the race for the White House, President Barack Obama or GOP challenger Mitt Romney?

Each campaign says they do, and are seeking to impress upon reporters that point.

"A week from today, we will know hopefully the outcome of the election and we believe that Mitt Romney will be the next president of the United States," Russ Schriefer, a senior adviser to Romney's campaign, said Wednesday afternoon in a conference call with reporters.

Obama campaign senior adviser David Axelrod cited poll and early voting numbers in a separate call a few hours earlier, saying, "We feel very, very good about the numbers that we're mounting up in those states."

Their efforts come with only six days remaining in the presidential contest and after several days of campaigning were scrapped as Superstorm Sandy battered several eastern states. On Monday, Obama's campaign held a call with the same theme, and earlier on Friday, Romney senior adviser Kevin Madden told reporters traveling with the candidate that Democrats were feeling under pressure.

"I think in many of these states where the Democrats considered those to be locked down, safe states that they weren't going to have to defend, they've now gone up with - they're now pouring resources into those states," he said. "They have to put up ads on the air, and I think that shows that they're playing defense, whereas when we've gone in with resources to many states, it's because we're playing offense, that we have an expanded map now to get to the, our electoral of 270."

Madden's briefing took place on a flight from Miami to Tampa, Florida, and was the first time in several days the campaign has held an on-the-record briefing for reporters.

The Romney campaign described their newly-developing effort in Pennsylvania - where they have announced an ad buy on Monday and Tuesday of next week - which Democrats have said is a bluff to show confidence.

Only 270 electoral votes are required to win the presidency, and the CNN Electoral Map predicts Romney holds 206 and Obama 237 with 95 among eight toss up states.

On Monday's Obama call, campaign manager Jim Messina said of Pennsylvania, "We're not going to take anything for granted."

Romney pollster Neil Newhouse said on his candidate's conference call that the race comes down to winning among independent voters.

"We lead among independents," he said. "If you take a step back from this you'll see exactly what this is, which is a very tight race that is very far from being decided right now."

- CNN's Rachel Streitfeld and Kevin Liptak contributed to this report

Also on the CNN Political Ticker:

- Back on stump, Romney aims for right tone

- Obama takes in damage with Christie in New Jersey