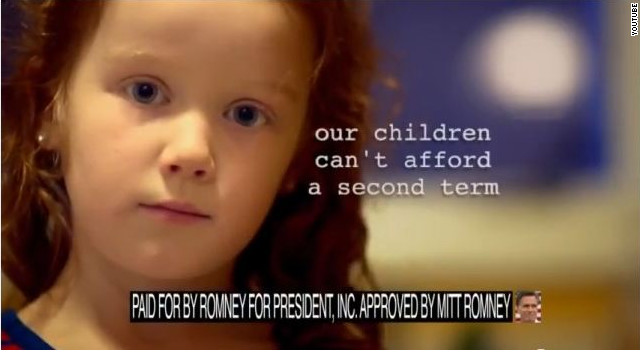 (CNN) - Mitt Romney's campaign has brought back a widely-discredited welfare claim in a new television ad, one week before Election Day.

In the ad--which was unannounced by the campaign but posted Tuesday on Romney's YouTube site–the narrator lists the "gutting" of the work requirement in welfare as one of President Barack Obama's so-called failed policies in his first term.

Along with high unemployment and a rise in food stamps, the Romney ad paints Obama as a threat to future generations.

"We may have made it through President Obama's first term," the narrator concludes, as footage of children are featured on the screen. "It's our children who cannot afford a second."

The ad, "Can't Afford Another Term," attacks an Obama administration directive that allows individual states–which have received a waiver from the Health and Human Services Department–to experiment with changes to their federally-funded welfare-to-work programs.

The intent, according to the directive, is to "challenge states to engage in a new round of innovation that seeks to find more effective mechanisms for helping families succeed in employment." But it also requires a 20% increase in the number of people moving from welfare to work in exchange for more flexibility granted by the waiver.

When Romney released a string of ads making the welfare attack this summer, an independent and non-partisan fact-checking organization, PolitiFact, rated Romney's offensive as "Pants on Fire." And the Obama campaign, the White House and former President Bill Clinton, who signed the original legislation into law, all hit back against the Romney spots, saying the claims were false and misleading.

"Mitt Romney's desperation has brought him back to his old welfare lie – showing once again that there's nothing he won't say to win this election," she said in a statement. "If the American people can't trust Mitt Romney's words in his campaign ads, how could they ever trust him with the presidency?"

When pressed about the welfare ads in September by CNN National Political Correspondent Jim Acosta, Romney defended his campaign's commercials, saying they've been "absolutely spot on."

"Anytime there's been anything that's amiss we correct it or remove it," Romney said in the interview.

Romney's campaign did not respond to requests for more information about the new ad. According to CNN's ad tracker Kantar Media CMAG, the commercial has already aired in Colorado, Florida, Iowa, North Carolina, Nevada, Ohio, and Virginia.