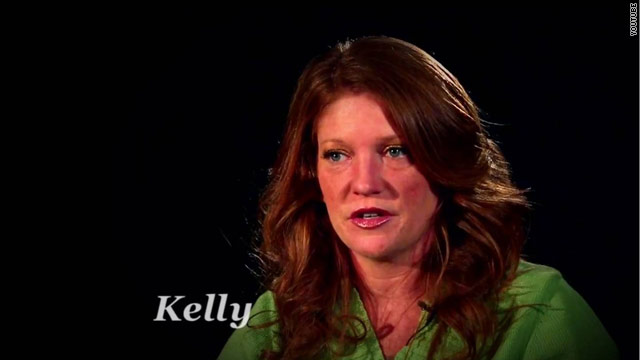 Washington (CNN) – Missouri Senate Candidate Todd Akin is trying to turn controversy he created about rape and women on its head – making a direct appeal to conservative women in a new television ad featuring a woman who says she was raped and had an abortion.

"I'm a single mother – a woman who's had an abortion. I've been raped in my past," says the woman who says her name is Kelly.

Though she doesn't say she regrets having an abortion in the ad, it is implied. She makes it clear she now thinks her abortion was a mistake in a longer companion video on Akin's website.

"The reason that I'm voting for Todd and that I'm so proud of him is because he defends the unborn. He's a kind man, a compassionate man. He has so much integrity," says Kelly.

She does not say that her aborted pregnancy was a result of rape, and a campaign spokesman said he is unsure.

Akin created major controversy and infuriated national Republicans when he suggested that a woman's body could somehow block a pregnancy resulting from rape. He later tried to clarify the way he phrased that, but stands by his position that abortion should be banned, even in the case of rape.

The ad also features another woman named Zoya who offers a broader testimonial, saying she emigrated from Russia when she was young, and she has gotten to know the Akin family and supports him.

Meanwhile, this new television ad is one of several Akin's campaign is airing in this final week with the help of an infusion of mystery money – funds from the Missouri state party which may have originated from National Republicans, who had vowed not to put a dime into the race when they were trying to force Akin to step aside.

The Missouri Republican Party joined in a $387,000 ad buy with the Akin campaign. It is unclear where the state party got its money, and aides to the National Republican Senatorial Committee (NRSC) told CNN they will not comment on whether it came from them.

Calls to the Missouri Republican Party were not returned, and Akin adviser Rick Tyler told CNN state party officials would not tell him where the funds originated.

After Akin refused to get out of the race, NRSC executive director Rob Jesmer opened the door to giving Akin money, despite saying earlier it would not happen.

Now more than ever, Republicans may need to snatch this Democratic seat in order to retake the majority in the Senate, since prospects of GOP pick ups elsewhere in the country are more up in the air than Republicans had anticipated earlier this year.

All in all, that would mean Republicans would have to pick up six Democratic seats to have a clear 51 seat majority – and their options would be even more limited without Akin winning in Missouri.

Republicans are playing offense trying to turn Senate seats like Montana, North Dakota, Virginia, Ohio and Connecticut red. But several of those races are neck-and-neck and hardly in the bag for the GOP. The problem for Republicans is they're are now playing defense in a growing number of competitive open GOP seats, like Indiana and Arizona

A new Mason Dixon poll of likely Missouri voters had McCaskill at 45%, Akin at 43%, and 8% unsure.

Missouri is a conservative state, especially on social issues like abortion, and Republicans there are hoping those undecided voters will break for Akin.

The National GOP that shunned Akin and tried to push him to step aside won't say whether they are now giving him 11th hour financial help, but he does have a lot more cash than ever before to close out the race.

Tyler tells CNN there is about $1.7 million in Missouri for Akin, if you combine the campaign's $300,000, money from the state party, and donations from a smattering of outside groups like the Family Research Council, which stood by Akin through the controversy.