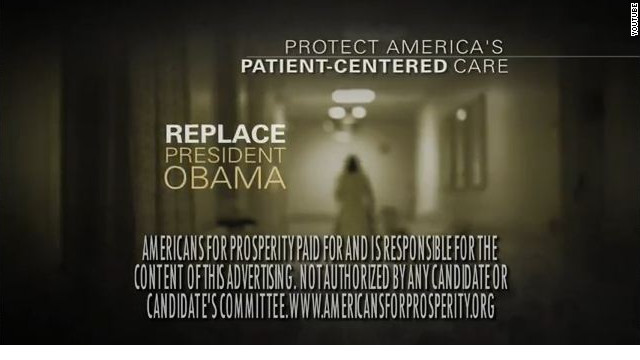 Americans for Prosperity, a group advocating for limited government and cutting government spending, on Thursday began a $3 million media campaign in the two states, running a previously-aired commercial that features people it says voted for the president in 2008 and will not do so again.

"He did get his health care through, but at what cost," one woman, Robin, says in the spot.

"I had hoped the new president would bring new jobs, not major layoffs," another woman, Maria, says.

A third voter, Richard, said of the president: "He said he was going to cut the deficit in his first term. I've seen zero interest in reducing spending. He inherited a bad situation but made it worst."

The spot ends with the words: "Has President Obama earned your vote? It's time for a change."

This new buy - which includes a second spot featuring a Canadian citizen talking about her problems with her country's health care system and urging Americans to get engaged in the health care debate - brings to $35 million the amount the group has spent on ads advocating against the president. A separate part of the group has spent $45 million on issue education aimed at the presidential race and Senate campaigns.

As part of a $5 million final ad offensive of the campaign, the second group, American Future Fund, is also investing heavily in those same states, buying $1.88 million worth of television time in Michigan and $1.67 million in Pennsylvania, a spokesman for the group confirmed to CNN. It also purchased $457,000 of time in in the battleground of Ohio. For this buy AFF will run two of its previous ads: Real Solutions, featuring all women talking about some of the economic problems facing the nation and A New Path, which uses clips of Mitt Romney from the presidential debate talking about the economic vision and detailing his economic plan.

The group is also investing $1.3 million for radio ads in the key states of Ohio, Virginia, Wisconsin, Florida, Colorado, Nevada and New Hampshire and Minnesota, where it also has advertising on television. Last week both the Romney and Obama campaigns also placed went up with tv ads in the state.

Tim Phillips, president of Americans for Prosperity, told CNN there were several reasons why the group chose to go on the air in two states not considered the most competitive.

"The return on our investment is very good," he said, adding voters in Michigan and Pennsylvania are not being inundated with campaign ads and calling it a "real opportunity."

A new EPIC-MRA poll in Michigan showed the president beating Romney by a 48% to 42% margin, while a Franklin & Marshall survey in Pennsylvania had the president with a 49% to 45% advantage.

While the Obama campaign says it is confident of its chances in both Michigan and Pennsylvania, it purchased television time this week in both to match Republican buys. "We will not cede any state in this race," Obama campaign senior adviser David Axelrod told reporters Wednesday in a conference call.

Phillips, who talked to CNN from one of the operation's locations in the suburbs of Cincinnati, said "this field effort is not a get-out-the-vote effort. It is very much aimed at people who are up in the air about President Obama's economic agenda."

The key emphasis for Americans for Prosperity is centered on the issues of the economy and health care. As part of this outreach, the organization did a lot of groundwork through demographic research and polling. It identified 9.1 million voters who the group thinks can be persuaded on these issues, as well as people who tend to be active in voting years. Its list includes 450,000 in Florida and almost 400,000 in Ohio.

"We want to go to them and say this agenda is terrible for the country," Phillips said describing it as "very much a laser beam approach."

The group was able through the congressional battles over health care and cap and trade to identify tens of thousands of activists who formed the basis of its targeting effort. Also it has had paid staff for several years in some of these key states, such as Ohio and Wisconsin, giving it an advantage in gearing up its election year outreach.