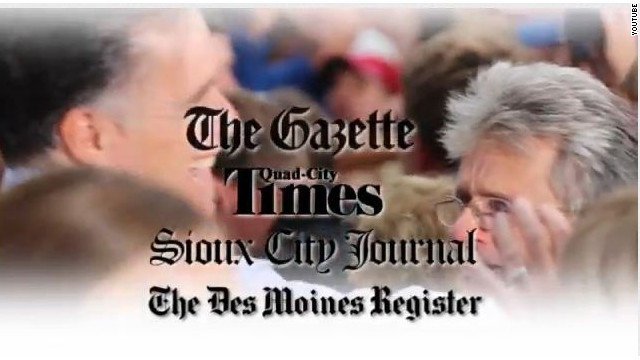 On Saturday, the most notable endorsement came from the Des Moines Register, the Hawkeye State's largest newspaper. It endorsed President Barack Obama last cycle, as well as Democratic nominees dating back for the last 40 years.

In the editorial, the board stated that the country needed a "renewed sense of confidence" in the economy. "That should come with Mitt Romney in the White House."

The Gazette of Cedar Rapids, the Quad-City Times of Davenport, and the Sioux City Journal also backed Romney in recent days.

"Mitt Romney's earned the support of every major newspaper in Iowa," the ad's narrator says, as footage of Romney on the campaign trail is displayed on the screen.

With six electoral votes, the swing state is highly contentious territory in the tight presidential race. Obama carried Iowa in 2008 by 10% and credits his surprise caucuses win in January of that year as the event that ultimately helped him capture the Democratic presidential nomination.

According to an NBC News/Wall Street Journal/Maris poll released Thursday, Obama had a six-point edge over Romney among likely Iowa voters, 50%-44%. The president will wrap up his re-election campaign in Iowa on Monday, the day before the election, his campaign confirmed Thursday.

While Romney was originally thought to be the winner of the Iowa caucuses this year, an official count later showed that former Sen. Rick Santorum of Pennsylvania bested Romney by a few dozen votes. Romney conceded victory to Santorum.