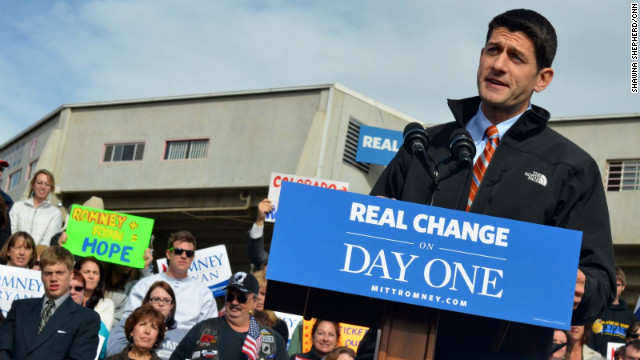 Roughly an hour after the Democratic incumbent held a rally in Las Vegas, Ryan spoke to fewer than a thousand people in Reno, where his running mate and Republican presidential nominee Mitt Romney campaigned just a week ago.

Ryan segued from Superstorm Sandy's devastation in the Northeast to the economic hardships Nevada residents have faced under the Obama administration.

In Reno, which is part of Washoe County that Obama carried in 2008 with 55% of the vote, Ryan urged supporters to take advantage of early voting, which concludes on Friday.

The vice presidential hopeful flew from Reno to Las Vegas where he visited a Romney victory center, thanked volunteers and called a few voters who had early voted for the Republican ticket. By the time Ryan arrived, Obama was on his way to Denver.

"We can early vote all the way through to tomorrow. I just made some calls in here and talked to some folks about making sure they get out and early vote," he told people outside the victory center. "This election is so important we need you to talk to your friends, your neighbors and even your relatives in this one, okay?"