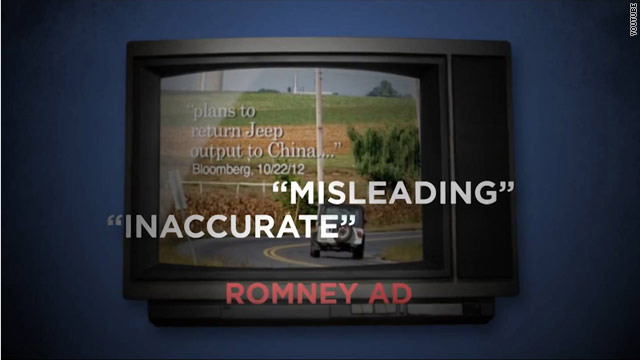 (CNN) - President Barack Obama's campaign is again responding to the claims leveled in an auto-themed ad by GOP nominee Mitt Romney with their own ad.

On Monday, Team Obama released a spot pushing back at the Romney spot, which was not announced by the Romney campaign but appeared on Ohio airwaves over the weekend and says, "Obama took GM and Chrysler into bankruptcy, and sold Chrysler to Italians who are going to build Jeeps in China."

The Obama campaign has argued Romney's spot is inaccurate and pointed to statements on Chrysler's website. The parent company of Jeep, Chrysler has said it plans to produce Jeeps in China to expand its sales within that country.

In the Obama spot, the narrator says, "We know the truth, Mitt," and shows video of the GOP candidate repeating the title of a 2008 op-ed he wrote on the auto bailout, "Let Detroit go bankrupt."

Romney argued a managed bankruptcy process and privately funded capital should have been used to stabilize the automakers, rather than federal bailout loans.

Sergio Marchionne, the chairman of Fiat, which owns Chrysler, said in a Monday online posting, "Jeep production will not be moved from the United States to China."

Before the Romney ad released, the company's top spokesman blasted the charge saying in a separate posting that while the news article the campaign cited was clear it "has given birth to a number of stories making readers believe that Chrysler plans to shift all Jeep production to China from North America, and therefore idle assembly lines and U.S. workforce. It is a leap that would be difficult even for professional circus acrobats."

Obama's campaign has insisted Romney's ad is a sign his campaign sees trouble in Ohio, and convened a conference call with reporters on Thursday to send the message.

"What we've seen in this last week from Mitt Romney is a desperate act by a desperate man, a dishonest end to a dishonest campaign," former Ohio Gov. Ted Strickland said on the call. "Governor Romney knows Ohio is slipping further and further away and with that are his hopes for winning the White House."

In response to the Thursday ad, she said, "President Obama can't run from the facts. As a result of his handling of the auto bailout, American taxpayers stand to lose $25 billion and GM and Chrysler are expanding their production overseas. Unlike President Obama, Mitt Romney has a comprehensive plan to revive manufacturing, create millions of good-paying jobs, and deliver real change and a real recovery."

The Obama campaign has said the ad will run in Michigan and Ohio - two states where the auto industry is a significant portion of the economy - although it declined to give more specifics. The pro-Romney super PAC recently went up on Michigan TV with an ad spot, prompting Obama's team to respond with their own buy.

Obama is also scheduled to speak at several campaign events on Friday and will likely mention the Romney ad, auto bailout and jobs numbers then.

While Ohio is a toss up state on the CNN Electoral Map and key for both candidates, Michigan and its 16 electoral votes is considered to be leaning in Obama's favor. Two polls out Wednesday showed Obama with an advantage in Michigan as well.