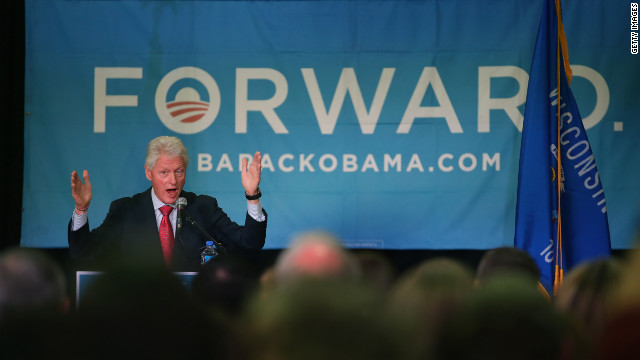 Clinton to head to PA in battleground state swing

After Mitt Romney's campaign said Thursday that the GOP presidential nominee and his running mate, Rep. Paul Ryan, would both stump in the Keystone State this weekend, an Obama campaign official confirmed Friday that the 42nd president would also hit the Pennsylvania trail.

Clinton will also stump in the battlegrounds of New Hampshire (where he will hold two events) and North Carolina, as well as Minnesota, where Romney's campaign and a pro-Republican super PAC are airing ads, Obama's campaign said in a Friday evening statement.

After recent polls indicated the race was tightening in the state, Romney's team said this week it was purchasing air time in Pennsylvania, a state long-considered to be leaning Democratic this cycle. The ad buy is worth $1 million, according to a source tracking media buys.

Meanwhile, the Republican National Committee and conservative super PACs bought $5.3 million worth of ads to run in the state.

While Romney's campaign says it is "looking at an expanded map" in the final days, Obama's team maintains the strategy is an "act of desperation."

However, saying it would not cede any ground, Obama's campaign also made a big ad buy ($2.7 million) in the state, following Romney's purchase. And Jill Biden, the wife of Vice President Joe Biden, will make four campaign stops in Pennsylvania on Saturday, the vice president's office announced Friday.

Clinton has been a top surrogate on the campaign trail this year for Obama. The former president has been crisscrossing the country, holding multiple events each day in key battlegrounds. Clinton and Obama will appear together Saturday in Virginia.

The campaign source did not provide additional details about Clinton's Monday visit to Pennsylvania, a state that has 20 electoral votes.

On the same day–the final day before the election–Obama will make a multistate swing through Wisconsin, Ohio and Iowa, before going to Chicago.

Obama carried Pennsylvania in 2008 by 10% over Sen. John McCain.

A Franklin and Marshall College poll released Wednesday showed Obama with a narrower margin over Romney in the state, 49%-45%.