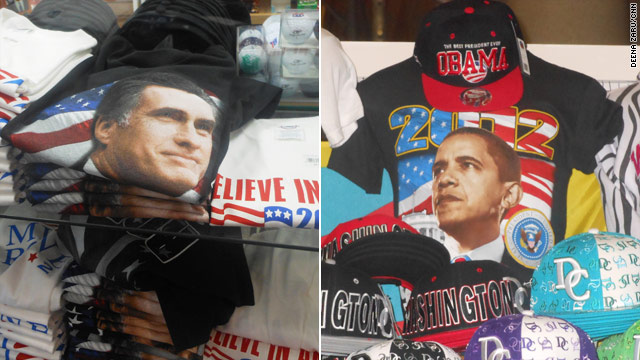 But compared to 2008 when Obama mania struck the District of Columbia, the lines of customers are generally short, vendors say.

Ali Durrani works at Alamo Flags, a popular family-owned stand in the highly-trafficked Union Station that has been there since the early nineties.

"(In 2008) right now we would be slamming with Obama sales," Durrani said. "A lot of people were here early on in the election but right now it's still a bit dead. We had two locations back then and we were slammed all the time."

While Obama merchandise is selling three times as much as Romney items, according to Durrani, the tourist season has come to a close and the store is getting an influx of locals from an overwhelmingly Democratic Washington, D.C.. Passersby often stop to take pictures with a life-sized cardboard President Obama fully dressed in a superman costume.

The most popular item is a t-shirt with a large "2012" brightly-colored by the stars and stripes of the American flag with President Obama's face filling out the center.

On the other side of Union Station, Linda Williams, the manager of America!, a popular souvenir store that attracts Union Station travelers, said Obama merchandise is selling much better than Romney's, but was unable to provide CNN with an estimate.

The store has a presidential press podium fully dedicated to commander in chief and first lady items purchased by tourists as keepsakes from the capital.

Williams said that Obama bobble heads, T-shirts, mugs, magnets and buttons have been selling well and travelers have also been buying Romney and Obama toilet paper as gag gifts for their friends.

A few miles away on the northwestern side of the city, Honest Abe's Souvenirs is in the heart o downtown D.C. and is frequented by tourists who visit the nearby museums and the Ford's Theater, where Abraham Lincoln was assassinated by John Wilkes Booth in 1865.

Before the first presidential debate, Obama merchandise at Honest Abe's was out-selling Romney 10-2, but the manager Freddy Vinoya said that after Romney's performance in the Denver debate, he started catching up.

"We have some locals buying Obama stuff but (the candidates) are pretty much even now," said Vinoya, adding that while they have sold more Obama merchandise overall, the momentum Romney gained after his performance in the first debate has boosted his sales and he is now in dead heat with Obama.

The highest-selling items are Obama 2012 and Romney 2012 t-shirts, which are folded on shelves with about the same amount of empty space on each.

On top of each shelf there are boxes of buttons with Obama's face surrounded by the words "Four More Years" and others with a portrait of a waving Mitt and Ann Romney, standing in front of the White House, with the words "America's Next First Family" printed at the bottom.

Durrani said that while Obama has an edge over Romney in D.C., it is not comparable to the energy and excitement of 2008.

"I was here in 2008 and it was crazy," said Durrani. "You went everywhere and everyone had something Obama. 2008 was a whole other level."