Washington (CNN) – The Obama campaign placed its final ad buy for the election on Friday with a special focus on key television markets in Florida and Virginia, an Obama campaign aide and ad buying source confirmed to CNN.

While the Romney campaign has said it believes it will capture both, Obama aides are not ceding them by any means with numerous campaign stops by the president, the vice president and Bill Clinton over these final days.

The Obama campaign increased its ad presence in Tampa and West Palm Beach, Florida and the Washington, D.C. area to reach the Virginia suburbs, Harrisonburg, Bristol and Charlottesville, Virginia.

Before this latest buy, the spending of the Obama and Romney campaigns, combined with their respective allied groups, totaled $93 million on ads in 11 states for nine days of television time, according to a source monitoring ad buys. Politico first reported Obama's final ad buy of the 2012 campaign.

Because of a large infusion of cash from Republican-leaning super PACs, Republicans now are enjoying a major advantage on the airwaves going into Election Day in the battlegrounds.

Between this past Monday and Election Day this coming Tuesday, Mitt Romney and Republican groups supporting him have purchased $63.6 million of television time while President Obama and his allies will spend $30.2 million.

Romney's campaign and several groups supporting his candidacy-Restore Our Future, American Crossroads, Americans for Prosperity and American Future Fund-are pouring in more than $6.6 million in these final days into Pennsylvania hoping to make the state competitive. Both Romney and his running mate, Rep. Paul Ryan, will be making campaign stops in the state over the weekend.

A recent poll there showed the president with a 4% advantage over Romney.

Obama campaign officials say they are confident of victory in Pennsylvania, which has been a reliably blue state, but add they will not cede any state and have bought $2.75 million in ads to run there. As evidence of the increased attention, for example, viewers in the Harrisburg area saw 4 pro-Obama ads and 18 pro-Romney ads Friday evening.

Viewers in the toss-up states have complained about being inundated with continuous ads for months, and the last minute spending will mean the saturation will only increase until Election Day.

When you directly compare spending just by the campaigns, Obama's $26 million outpaces Romney's $22 million for the final week of the campaign.

Before the final Obama ad buy was made, here was the breakdown of the Obama and Romney ad buy totals 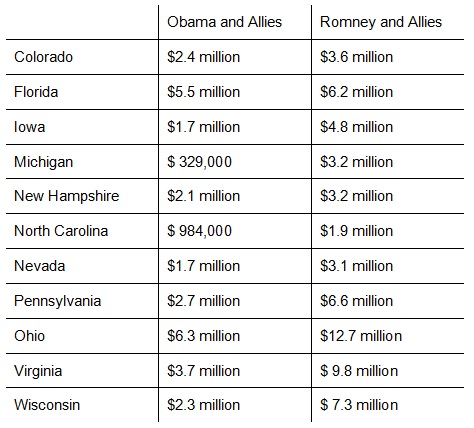