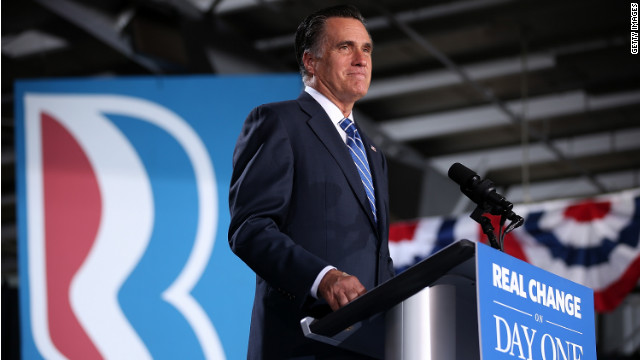 "The closing hours of a campaign have a dynamic of their own," Romney said in a speech outside Milwaukee, describing how some people were just beginning to tune into the presidential race as the contest comes to a close.

"We ask you to look beyond the speeches and the attacks and the ads. Look to the record, the accomplishments and failures, and the judgment. Words are cheap. A record is real and earned with effort. Change cannot be measured in speeches; it is measured in achievements," Romney said, before launching into a list of areas he said Obama had failed to live up to his vows as a candidate in 2008.

The Republican candidate said if he were president, "Every entrepreneur, every small business person, every job creator will know that for the first time in four years the government of the United States likes business and loves the jobs and higher wages businesses can bring."

The visit marked Romney's first stop in Wisconsin since the day after he announced Rep. Paul Ryan, a native of the state, as his running mate. The vice presidential choice effectively put Wisconsin in play, but recent polls show Romney slightly behind Obama.

According to a CNN Poll of Polls in the state, an average of three Wisconsin polls of likely voters conducted over the past week, Obama has a 51%-44% advantage over Romney.

He also promised to be an effective partner with Congress, saying Obama was guilty of rebuffing legislators during the three-and-a-half years he's been in office.

"I mean he has ignored them. He has attacked them. He has blamed them," Romney said. "The debt ceiling will come up again and shut down and default will be threatened, chilling the economy. The president was right when he said we said he can't change Washington from the inside. In this case you can take him at his word. We are going to put him outside soon."

Describing his campaign as a "movement," Romney said the "shared conviction" of his supporters motivated him to become a better candidate.

"It has made me strive even more to be worthy of the office, to campaign as I would govern, to speak for the aspirations of all Americans," Romney said.

Prior to taking the stage, Romney got a big cheesehead boost from NFL Hall of Famer Bart Starr. The former Green Bay Packers quarterback began to tear up as the vocal audience gave Starr a big welcome.

"This is quite a thrill for my wife and me to be here today with you," he said, wiping away tears. "We lived here in Green Bay for 31 years. It will always be our adopted home."

Starr cracked open a book written by coaching legend Vince Lombardi, who wrote about the qualities of leadership.

"If you read inside this," Starr said, "He is talking about a Mitt Romney."

The former football star read a few passages, including a list of what Lombardi considered to be excellent characteristics. They boiled down, he said, to two traits: "integrity and excellence."

"That's quite frankly, ladies and gentlemen, what I have seen in Gov. Mitt Romney," Starr said.

After the event, Romney walked over to greet an overflow crowd of supporters, to whom the GOP nominee stressed the importance of turning out the vote.

With four days left, Romney made one final prediction: "We're going to do something that surprises a few people in the White House that are there right now, and that is we're going to win Wisconsin on Tuesday."

- CNN's Rachel Streitfeld and Jim Acosta contributed to this report.