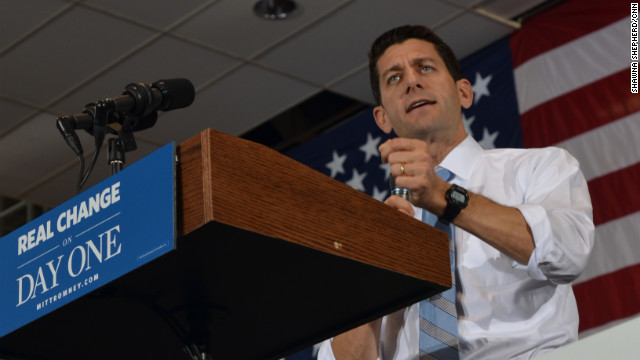 On Friday, the Labor Department announced the nation's jobless rate inched up to 7.9% in October, from 7.8% in September, but 171,000 jobs were added last month.

Even though the U.S. economy now has more jobs than it did when President Barack Obama took office in January of 2009, the Republican vice presidential nominee blamed sluggish growth on the Democratic incumbent's failed policies.

"The economy is growing at less than half the rate that the president said it would be growing at if only he could borrow a bunch of money and spend it on his cronies and stimulus package," he said in western Colorado. "We are 9 million jobs short than what he said he would accomplish. Look, in the president's campaign for another term, he has offered nothing different and if he is re-elected, nothing different is exactly what we would get."

The rally drew nearly 1,000 people to an airport hangar in Montrose, a county that GOP presidential nominee Sen. John McCain won handily in 2008.

"He knows firsthand because he's helped create tens of thousands of jobs," Ryan said, referring to Romney's experience in the private sector as a Bain Capital executive.

The Midwesterner recognized the smell of manure in the air – a nod to the area's agriculture hub. "I can smell success right now," said Ryan, after he took an audible whiff. "We live in dairy, corn and bean country in southern Wisconsin. That's the smell of success isn't it? That's the smell of progress. I love that smell, it makes me feel at home."

The seven-term congressman and House Budget Committee chairman also touted the background of the Republican ticket in governing.

Later in the day in another crucial battleground, Ryan held a rally at the University of Northern Iowa, located in one of the state's 52 counties that voted for Obama in 2008 and helped him claim six electoral votes over McCain by almost 10 percentage points.

"We're asking you to talk to those people who thought hope and change sounded good in 2008 who now know better. The whole thing is up for grabs," he said. "We cannot afford as a nation to wait four more years for real change, lets make sure we only wait four more days."

On Friday evening the vice presidential hopeful reunited with his running mate for a joint rally in West Chester, Ohio.