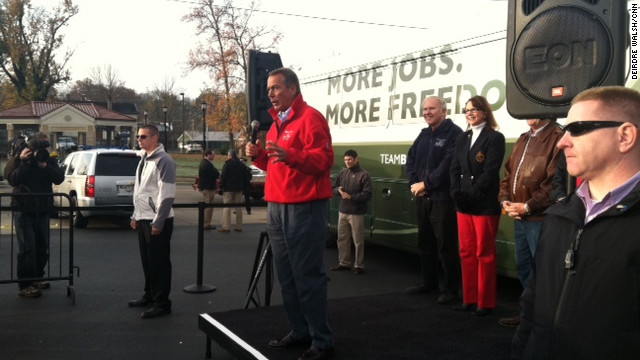 EDITOR'S NOTE: CNN has sent dozens of reporters, producers, contributors and correspondents to the key battleground states to cover the final days of the 2012 election. The following dispatch is from CNN's Deirdre Walsh who is traveling with House Speaker John Boehner on an Ohio bus tour over this pre-election weekend.

Lebanon, Ohio (CNN) - When House Speaker John Boehner took the small stage at the first event on his three day statewide bus tour his mission was clear - rally the GOP faithful to get to the polls and make sure this solidly red county turns out in big numbers for GOP presidential candidate Mitt Romney.

"Three more days!" Boehner chanted along with the small crowd of GOP supporters in a parking lot outside the Warren county victory center.

Sporting a red "Real Recovery Road Rally" fleece, the House speaker told supporters it was day 43 of a 45 day trip across the country for the GOP ticket and House Republican candidates.

Boehner's was a much smaller crowd than the almost 30,000 Republican supporters who attended a rally with Romney in Boehner's hometown of West Chester on Friday night.

The speaker stuck to his economic message – saying of the President, "He promised change, he promised post-partisan politics, and you know the fact is he hasn't done what he said he would do."