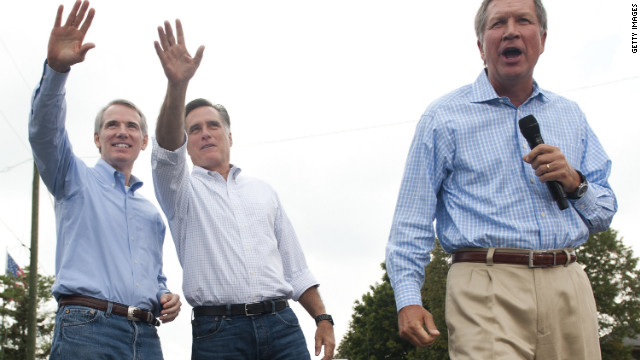 Columbus, Ohio (CNN) - Two of Ohio's top Republicans on Saturday waved off a spate of polling that shows President Obama with a small but steady lead in the pivotal state.

"I am not worried about the public polls," said Sen. Rob Portman.

"I don't think it will be close to what the polls are saying," echoed Gov. John Kasich.

Portman and Kasich, clad in Buckeye red, were attending a tailgate party organized by Mitt Romney's campaign outside Ohio Stadium, where an undefeated Ohio State team was preparing to host the University of Illinois.

Internal Republican tracking shows the race much tighter, with Romney even holding a tiny lead in Ohio as recently as a few days ago, according to multiple GOP sources.

Kasich said GOP enthusiasm is being underestimated by public pollsters who are forecasting a Democratic turnout on par with the 2008 election.

"I don't feel the kind of enthusiasm among Democrats that I see among Republicans," he said. "The turnout models that show a bigger Democrat turnout than what is likely to occur, that's why I think Romney is going to win. It's intensity."

Portman noted that recent public polls in Ohio show Romney winning independent voters, and most are within the sampling error. He said Republican enthusiasm here reminds him of the 2000 election, when George W. Bush won Ohio by about 165,000 votes.

"We had in 2000 a lot of the energy and enthusiasm that we do today," he said. "In 2004 we won, but it was because we over-performed in small towns and rural areas. This year, I see it everywhere. People are really fired up."

Portman admitted that Hurricane Sandy "wasn't helpful" to the Romney campaign at a time when it had some momentum, but suggested televised images of frustrated storm victims in New York and New Jersey might have an impact on a small number of undecided voters this weekend.

"As usual in a major disaster like this, there are a lot of people who are concerned about the government not providing the assistance they deserve and need," Portman told CNN. "People are feeling like, 'Hey, where's FEMA? Where's the help that I was promised?'"