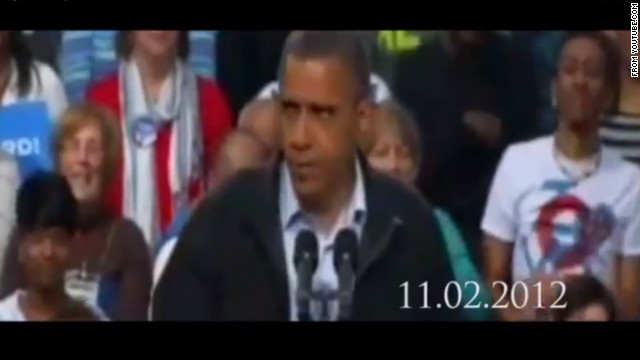 (CNN) - With only three days remaining in the presidential race, Mitt Romney's campaign wasted no time in turning comments President Barack Obama made Friday into a campaign ad.

"Don't boo - vote!" Obama said at a rally Friday in Springfield, Ohio, a regular rallying cry he uses on the stump.

The comment appears in the new Romney ad and then is rebutted by the GOP candidate's response at a rally in West Chester, Ohio.

"[D]id you see what President Obama said today? He asked his supporters to vote for revenge-for revenge," Romney said. "Instead, I ask the American people to vote for love of country."

The new ad comes amidst $93 million in ad time purchased by Obama and Romney's campaigns, as well as their allies, in the last nine days before Election Day on Tuesday, a source who tracks ad buys told CNN.

Romney's campaign did not say how much it is spending to run the spot, nor in what states or markets it will run.

Romney is on the campaign trail Saturday, stumping in New Hampshire, Iowa, and Colorado.