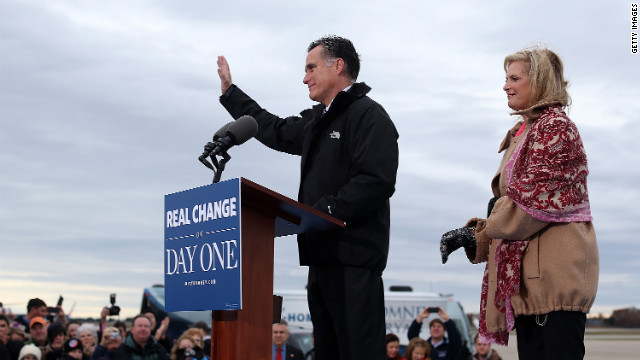 Running short on sleep but with the end of the campaign three days away, the Romneys thanked an audience of roughly 1,000 supporters who braved chilly temperatures to hear the GOP presidential candidate speak.

"New Hampshire got me the Republican nomination and New Hampshire is going to get me the White House!" Romney said.

The former Massachusetts governor won New Hampshire's primary in January before going on to wage a lengthy battle against resurgent Republican opponents to become the party's standard-bearer.

Now, in the closing weeks of the campaign, Romney has focused much of his time on visits to Ohio, Florida, Virginia, Colorado and Iowa. Before Saturday, his last rally in New Hampshire was a town hall forum with Paul Ryan in early August, but the Portsmouth rally was one of two stops Romney will make in the swing state in the last three days of the campaign.

On Saturday, he cast his election effort in lofty terms.

"We've journeyed far and wide in this great campaign. We've had some long days, and some very short nights, but we are almost there," Romney told the audience. "And the door, the door to opportunity, is open and we're going to walk through it. Come walk with me. Walk together to a better place."

Urging the crowd to woo disaffected Obama supporters, Romney charged his rival "came into office with so many promises and he's fallen so fall short."

"Talk is cheap," he continued. "A record is real and takes hard work and he has not been able to accomplish it and I actually have a record of accomplishment and that's why I'm running."

Later on her husband's campaign plane, Mrs. Romney told reporters the campaign had been "an extraordinary experience."

"It's really humbling. It's very touching for me," she said. "I hear the voices and the passion of the people out there that are really hurting, and they are etched in my mind and my heart, as they are with Mitt."