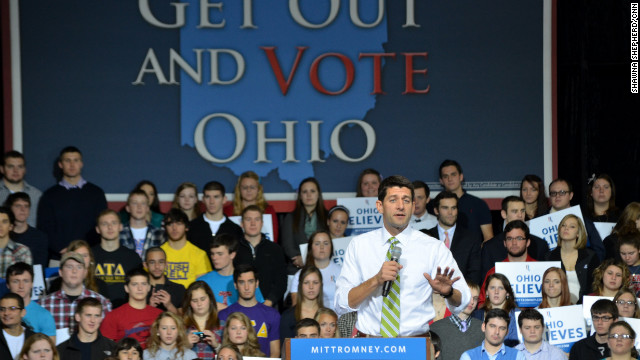 With just three days left in the race the GOP presidential campaign is seizing on the remark to illustrate how Obama's message differs from their own, which they say is a more positive message of change.

"And in 2008 he appealed to our highest aspirations, now he's appealing to our lowest fears. You know, just yesterday he was asking his supporters at a rally to vote out of revenge. Mitt Romney and I are asking you to vote out of love of country," the vice presidential nominee said. "We don't believe in revenge. We believe in change and hope. We actually do."

Obama was campaigning in Springfield, Ohio when he altered a usual refrain from his stump speech that caught the attention of his opponents.

That evening, in West Chester, Romney responded, "Our big dreams will not be satisfied by his small agenda that already failed us. Today, did you see what President Obama said today? He asked his supporters to vote for revenge – for revenge. Instead I ask the American people to vote for love of country."

And that became the subject of a new television ad released Saturday by the Romney-Ryan team.

At a rally in southeastern Ohio, in a county that voted for GOP presidential nominee Sen. John McCain in 2008, Ryan said the president has not delivered on promises he ran on four years ago.

"He said he'd cut the deficit in half, that he'd get people working again, and he'd create jobs. You see all those jobs here in Marietta?"

Ryan continued, "Look, it sounded good and when he got elected people naturally expected him to deliver those results but it didn't happen and look what we got. Washington is more divided than it ever has been before. And the deficit, it double from what he said it would be."

After Ohio the vice presidential hopeful will speak at campaign events in Florida, Virginia, and Pennsylvania.