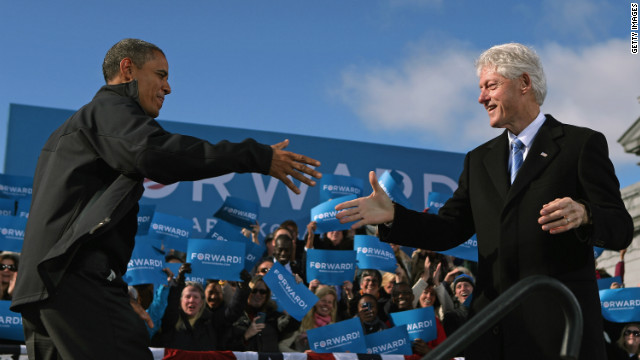 Clinton - who has been highly visible on the campaign trail for the president and stumped with Obama Sunday morning in battleground New Hampshire - laid out his case to re-elect his Democratic descendant in The Des Moines Register.

In the op-ed pointedly titled "Romney wants to undo progress Obama made," Clinton wrote that no president could have fully recovered in just four years an "economy losing 800,000 jobs a month in the worst financial crisis since the Great Depression" when Obama took office in 2009.

"But since the private sector job losses ended 31 months ago, the economy has produced 5.2 million private-sector jobs," Clinton wrote ticking off signs of a recovering economy including a drop in the unemployment rate and a four-year high of auto and new home sales.

Clinton wrote that while Obama is "creating a more inclusive, fairer America" - pointing to the president's signing of the Lilly Ledbetter Fair Pay Act and executive order allowing children of undocumented immigrants to stay in the United States without fear of deportation for those who obtain higher education or join the military - Romney "plans to reduce taxes again on the wealthiest Americans and make large cuts in programs that help the middle class and poor children and spark new economic opportunity."

The Des Moines Register threw their support behind Republican nominee Mitt Romney in late October - a surprising endorsement coming from a newspaper that has not backed a Republican for president in over 40 years.

While the Iowa paper's endorsement praised both Romney and Obama, the decision, the editorial board wrote, ultimately came down to one question. "Which candidate could forge the compromises in Congress to achieve these goals? When the question is framed in those terms, Mitt Romney emerges the stronger candidate."

Obama picked up the endorsement of Ohio's Chillicothe Gazette on Sunday, which endorsed Republican Sen. John McCain in 2008. The Gazette wrote in its endorsement that "President Obama has proved his ability to lead in tough times. He's made decisions unpopular with Democrats, while moving forward on items with Republicans."

Clinton will also make stops in North Carolina and Minnesota Sunday for the president and heads to Pennsylvania Monday as part of the Obama campaign's final push for the White House in 2012.