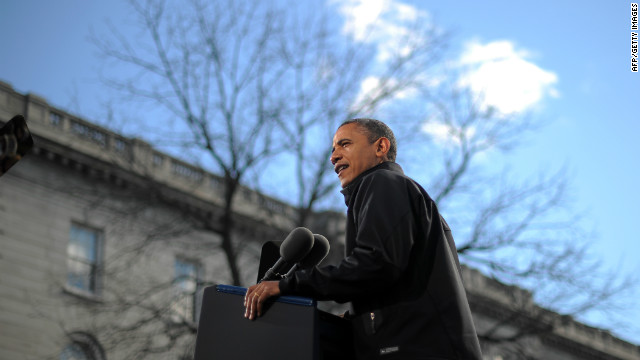 "I looked at David Plouffe and some of you know he's my big campaign bus smart guy, Plouffe and I looked at each other and we said you know what? We're no longer relevant now, we're props," Obama told the crowd of 14,000 outside the Concord state capitol building.

He used the line to emphasize the importance of the campaign ground game, just three days until Election Day.

"What's happened is now the campaign falls on these 25 year old kids who are out there knocking on doors, making phone calls and then we realized pretty soon after they do their jobs then now they're not relevant either because it's now up to you," Obama said.

The president delivered a similar line in battleground Virginia Saturday night, saying "as the campaign goes on, we become less relevant."

"I'm sort of a prop in the campaign," Obama said. "The planning, everything we do, it doesn't matter, because now it is all up to you."

At the president's first event Sunday, he continued to chastise Republican presidential candidate Mitt Romney for taking up the mantle of "change." He said Romney is offering a plan that would rule out compromise and rubber stamp the tea party agenda, while he will continue to work with Republican members of Congress.

He added that voters can trust he will always tell the truth, even if there are disagreements.

"Michelle doesn't agree with everything I do," he added.

Former President Bill Clinton joined the president on the campaign trail again for the New Hampshire stop, also hitting on the congressional cooperation theme. The Democratic stalwart said electing Obama to a second term will "keep the door open" to further cooperation between the two parties. After Tuesday, members of the GOP "will walk through it."

Playing to the Granite State crowd, Clinton, who won the state during his two runs for the White House, said "it's no secret that I never tired of coming here."

"It is a very good thing that in the closing days of this campaign you have the chance to send the president back to where he belongs, to four more years in the White House," he said.