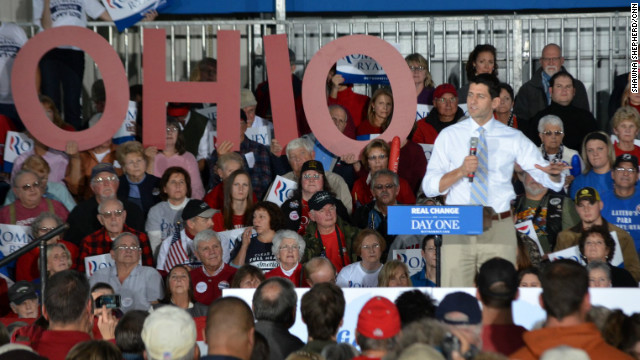 The Republican presidential ticket has struggled to overcome President Barack Obama's edge in the crucial battleground state perhaps in part because of Mitt Romney's opposition in 2008 to a federal auto bailout of the U.S. auto industry.

In Mansfield, Ryan came to his running mate's defense. He mentioned the General Motors Fisher Body stamping plant that ceased operations at the Mansfield-Ontario Metal Center in 2010.

"I feel very much here at home because Janesville, Wisconsin's a lot like Mansfield, Ohio. A town of similar size – we had a GM plant we lost, you had a stamping plant that you lost," he said. The auto plant in Janesville closed when President George W. Bush was president and before the federal government intervened in 2009.

Ryan continued, "It's not going the right way in some places in America, and you know what it doesn't have to be like this. We don't have to settle for this. This may be the best that President Obama can do but it is not the best that America can do."

Before Ryan came on stage and formed "O-H-I-O" with his three kids, State Sen. Larry Obhoff teed up the vice presidential hopeful's criticism of the Democratic incumbent.

"The auto bailout didn't help Mansfield. When the administration inserted itself into the auto industry the GM plant here in Richland County was closed down," Obhoff said at the rally with about 1,000 people.

Obhoff and Ryan also mentioned defense cuts possible if the so-called "sequester" is implemented at the end of the year that would jeopardize hundreds of jobs at nearby Mansfield Air National Guard Base.

"Right here in the shadow of the 179th, this is an air lift wing that has proven its mettle. This is an airlift wing that has shown how tactical airlift is so important," Ryan said. "The president's reckless and devastating defense cuts it's the only area he is eager to actually cut spending, which is the primary responsibility of the federal government, national defense."

Ryan continued, "We do not agree with this sequester, we will not allow this sequester to take place. We will put national security first and foremost and make sure that we have peace through strength. That keeps us safe. That keeps us secure. That makes sure that our men and women who are fighting for us have what they need to do their jobs. We are serious about this."