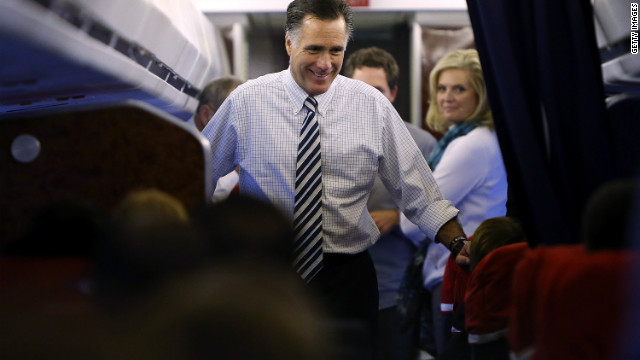 (CNN) – A top adviser for Mitt Romney's campaign explained Sunday why he thinks the GOP nominee can win Pennsylvania, a Democratic-leaning battleground that Romney's team has lumped into its final swing-state push.

"You have Obama who is under-performing, and we're over-performing and as a result you have president in a critical battleground state below 50 (percent) and it's presented us an opportunity," Kevin Madden said on a flight with reporters.

A Franklin and Marshall College poll released Wednesday showed the president had a 49%-45% advantage over Romney in the state, a tighter margin than other polls have shown. In the last week, the campaign has purchased major ad time in the Keystone State, and Romney himself is making a campaign stop there Sunday, following a visit his running made in Pennsylvania on Saturday.

Madden said the campaign is seeing a "real response" to Romney's message among independent voters in counties around Philadelphia, particularly on economic issues.

"We have a really strong volunteer infrastructure that we think could make a difference, and that's why we're traveling there with two days to go, and we have spent a lot of time uh, spent some time in the last few weeks concentrating on expanding the map," Madden added.

President Barack Obama's campaign said it feels confident about the state–which Obama carried by 10% over Sen. John McCain in 2008–and called Romney's expanded map strategy an "act of desperation." Not ceding any ground, however, Team Obama also took out ad time to match the Romney purchase.

Chicago Mayor Rahm Emanuel, former chief of staff to Obama, said Sunday the campaign "is set" in Pennsylvania but cautioned it was better to be safe than sorry.

"I think Pennsylvania is secure, but you don't take anything for granted," Emanuel said on CNN's "State of the Union."

On the flight, Madden also pushed back against the argument made by some commentators, including Republicans, who say Superstorm Sandy and the surrounding media coverage could ultimately hurt Romney's presidential bid.

"The hurricane is what broke Romney's momentum. I don't think there is any question about it," former Republican Mississippi Gov. Haley Barbour said on "State of the Union," adding that the storm took attention away from what he described as the contrast between Romney and Obama.

Madden, however, said he doesn't look at how the storm affected "people through a political lens."

"Instead," he continued, "we are focused on what we can do to make sure that the enthusiasm that we have seen in states, that it's part of helping our get-out-the-vote efforts."

Having already attended rallies Sunday in Ohio and Iowa, Romney also holds events in Pennsylvania and Virginia. In the final days before the election, Romney has been crisscrossing the country, making his closing argument in several battlegrounds.

Projecting an air of confidence, Madden said he, the former Massachusetts governor and other advisers were passing the time Saturday by shouting out their favorite movie lines on the plane.

While Romney said his favorite film was "O Brother, Where Art Thou!" others chimed in with lines from "Diner" and "Anchorman."