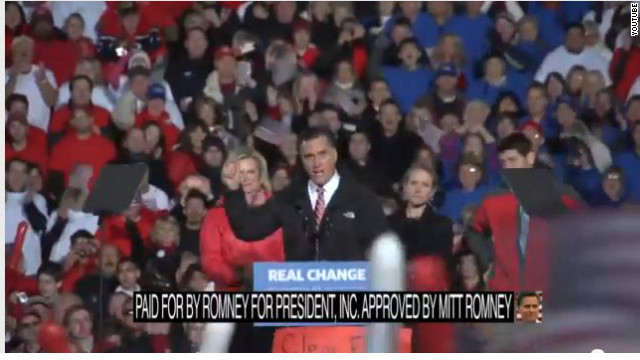 The one-minute spot, "Bigger, Better America," showed Romney speaking to the massive Ohio crowd, which was estimated to be between 18,000 and 30,000.

"You saw the differences when President Obama and I were side to side in our debates. He says it has to be this way. I say it can't stay this way. He's offering excuses. I've got a plan," Romney says in the ad.

The Friday rally was the official kick-off to Romney's final multi-state swing, which the campaign has dubbed a "Real Recovery Road Rally" tour, before Election Day. The four day blitz features events with the candidates, their wives and 100 surrogates in 11 states.

"Americans don't settle. We build. We aspire. We listen to that voice inside us that says we can do better – a better job, a better life for our kids, a bigger, better country," Romney continues in the ad.

The candidate travels to Iowa, Ohio, Pennsylvania and Virginia Sunday as he makes his closing argument.