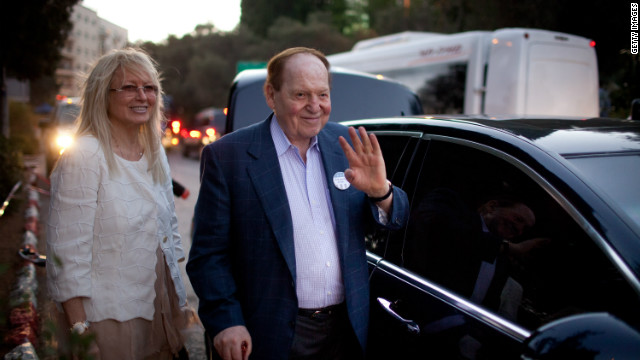 (CNN) - The billionaire casino mogul who pumped millions into pro-Republican efforts this year - most notably groups backing Newt Gingrich and then Mitt Romney's bids for the White House - penned an op-ed on the eve of Election Day explaining why he is backing the GOP.

Though media-shy in the past, Sheldon Adelson has been more open recently. He wrote in The Wall Street Journal Sunday night that he was raised a Democrat, "typical of the Jews of Boston in the 1930s and '40s," but switched not because he earned his way into wealth, but because the Democratic Party "has changed in ways that no longer fit with someone of my upbringing."

"There is now a visceral anti-Israel movement among rank-and-file Democrats, a disturbing development that my parents' generation would not have ignored," he wrote, citing a poll as well as the tumult at the Democratic National Convention this summer over the removal and eventual inclusion of Jerusalem as the capital of Israel in the party platform.

The changing values of Democrats, he said, has also impacted the way they approach the role of government, charity, and business in the United States.

"Whenever President Obama deplores the wealthy ('fat-cat bankers,' 'millionaires and billionaires,' 'at a certain point you've made enough money,' and so on), it tells me that he has failed to learn the economic lessons of Illinois, and that he still doesn't understand the vital role entrepreneurs play in creating jobs in our society," Adelson wrote in the Journal.

Adelson and his wife, Miriam, backed Gingrich through the GOP primaries and were the primary bankrollers of the key super PAC supportive of the former House speaker's bid, which launched some harsh attacks on Romney. Adelson's team said the contributions were made without directives about how the money be spent.

After meeting with Romney this spring, including an hour and a half sit-down in his Las Vegas office, Adelson and his wife backed Romney as the party nominee and attended the former Massachusetts governor's fundraiser in Jerusalem this summer.

The Center for Responsive Politics said the Adelsons have invested over $53 million into outside groups this cycle, making them the top donors to such groups. The center notes their numbers include only disclosed contributions, while not all political groups are not required to disclose their donors.

Adelson noted that he differs with the GOP on some issues, but, like his "old immigrant Jewish neighbors" in Boston, would side with the party they find common ground with on the most important issues.

"Although I don't agree with every Republican position - I'm liberal on several social issues - there is enough common cause with the party for me to know I've made the right choice," he wrote. "The Democratic Party just isn't what it used to be."