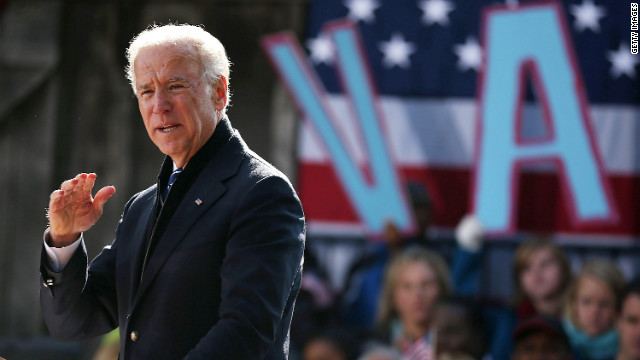 "Now they're trying to scare the living bedevil out of Ohioans. One in eight jobs in Ohio is in the automobile industry," Biden said at the event at a farm in Sterling.

The ad in question, airing in the Toledo market, claims GM plans to double the number of cars built in China and that Chrysler plans to start making Jeeps in the same country.

"Mitt Romney: He'll stand up for the auto industry in Ohio, not China," the ad's narrator concludes.

Executives for General Motors and Chrysler blasted Romney for the spot, saying there's no truth to the claim that Jeep production is headed to China, saying instead Chrysler was considering opening a Jeep plant in China to manufactures vehicles to be sold in the country.

"So they're running an ad nonstop, even though every single solitary outlet has pointed out it's a lie," Biden said Monday in Virginia, pointing to gains made by the American auto industry in the years since the auto bailout was implemented.

"Just as people are getting up off their backs, just as they're able to turn and look at their kid and say, honey, it's going to be OK, dad or mom's back, they're getting the living devil scared out of them again. They're running these ads nonstop saying their jobs are going to be lost again," the vice president said.

Joining Biden in Virginia was Democratic Senate Candidate Tim Kaine, as well as Virgina's two Democratic senators Jim Webb and Mark Warner, all of whom will travel with the vice president for the rest of his swing through Virginia.

At the beginning of his 20 minutes-long remarks, Biden described the efforts he and President Barack Obama were taking to assist people in the path of last week's storm, and following the speech joined Obama, governors and mayors on a conference call with FEMA to discuss the federal government's storm relief effort.