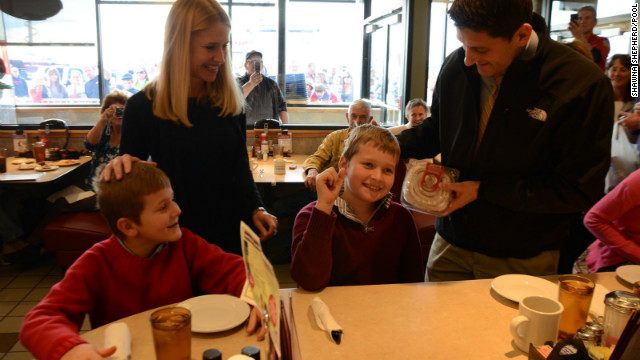 Johnstown, Colorado (CNN) - Mitt Romney's running mate Paul Ryan, a Roman Catholic, asked a priest he met at a restaurant Monday to bless a rosary he carries with him.

The Republican vice presidential nominee was in the middle of a five-state battleground blitz through Nevada, Colorado, Iowa, Ohio, and Wisconsin, the day before Election Day when he met Father Greg Ames prior to his second rally in Johnstown, Colorado.

At Johnson's Corner, a truck stop restaurant and gift shop that's been in business for 60 years and is renowned for its cinnamon rolls, Ryan walked up to the counter with wife Janna and three kids and said, "Can I order two dozen cinnamon rolls, regular size, but can we see one just so we can like stare at it for a little bit before we eat it?"

The fitness fanatic who prefers healthy food to sweets marveled at the size of the 12-ounce cinnamon roll his server Kelly handed him in a plastic container. He held it up next to his 10-year-old son Charlie and 7-year-old son Sam.

"Look at that, it's about the same size as your head, Sam," he said.

While he waited for his to-go order of cinnamon rolls Ryan turned to a nearby booth and met Ames, who introduced himself to the vice presidential hopeful as "Father Greg." Ryan noted the Catholic priest, who is from Immaculate Heart of Mary with a parish of 5,000 in Northglenn, was dressed casually in a white long sleeve shirt, pants, and a gold necklace with a cross.

With his wife nearby Ryan asked Father Greg to bless his Rosary that he pulled from his jacket pocket. The Wisconsin lawmaker, who takes his children to Sunday mass at home in Janesville, has said since he joined the Republican ticket on August 11 he's been really moved by the number of people who offer him rosaries on the campaign trail.

After the candidate received his blessing Ryan was asked how he was feeling about the presidential election and he said, "I feel very good."