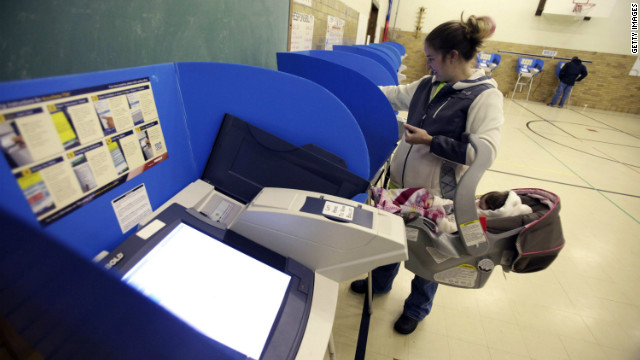 GAME ON: ELECTION DAY IN AMERICA…

Play Along at Home with John King’s Magic Wall

TRAIL TRIVIA
(Answer below)
Voters have gone to the polls on November 6 a total of six times since 1845 - the year Congress standardized election dates. Out of those six elections, how many times did the Republican candidate win?

Our colleagues and I share with you what they'll be watching tonight:

It's been called Obama's election "firewall." But truth be told, it's looking more and more like Romney's make-or-break state.

Gloria Borger: How will the white vs. nonwhite vote split

One important indicator I will be looking at Election Night is the question of ethnicity - and how the white vs. the nonwhite population splits. In the 2008 election, 74% of the electorate was white. That percentage has declined recently because of the growth in the Hispanic and voting African-American population. In an analysis by Republican pollster Bill McInturff, the question of the white/nonwhite divide is called the most "critical" of the election. His analysis shows that if the white percentage of the electorate drops to 72%, Obama will probably win the election.

The first thing I'll watch is the exit polls to see who's voting and where - in particular, heavy Latino turnout in Colorado, Nevada, Virginia and Florida could indicate Obama wins those states. … Then, it's Virginia, Florida and Ohio. … I'll watch the Virginia suburbs of Washington, particularly the female vote. Romney won't win here, but he has to hold down Obama's numbers while running up his own score in the rural area. Romney has to win Virginia. Florida is all about the Interstate 4 corridor. North of it votes Republican, south of it Democratic. The I-4 corridor decides.

Everyone will tell you to watch Lake, Stark and Hamilton counties in Ohio. There are good reasons to watch all of them, reasons no doubt delineated by my colleagues. But for me, it's all about Ottawa County, which has correctly picked the presidential winner in Ohio since 1944. That's a better record than pollsters. I'll watch Ottawa.

Polls begin to close in Florida at 7 p.m. ET, and a handful of counties will report their absentee and early vote tallies immediately. Once that happens, political pros in Florida will be anxiously refreshing election board websites in a handful of those counties - Pinellas, Duval, Orange - in search of early clues about which way the state is trending.

One of them is Pasco County, outside Tampa. Officials there are diligent about posting returns as quickly as possible. The county has a slight Republican tilt, but Obama won the early and absentee vote there in 2008 despite losing the county on Election Night. For Democrats, it was a promising sign that Obama was well on his way to being competitive statewide, even in GOP-leaning areas.

In 2004, George W. Bush beat John Kerry in the Pasco early/absentee vote by eight points. Bush ended up winning the county by 10 points. In a shift four years later, Obama beat John McCain by five points in the early absentee vote. He ultimately lost the county - but only by 3.5 points, thanks to the votes the campaign banked early.

If Obama is losing Pasco by more than that Bush/Kerry margin by the time the first returns are posted, it could be a tough night for Obama in Florida.

John King: The suburban vote and who votes in the swing states

Watch the vote in the suburbs around Cleveland and Columbus, Ohio, and in northern Virginia. These are two early-closing states; if Romney is holding his own in the suburbs, we have a competitive night. If not, it could be effectively over before we get to the Central Time zone.

If so, then Obama is likely on a path to victory. But if the percentage of African-American, Latino and younger voters is down just a bit - and the electorate looks, say, more like the 2004 presidential election - then Romney has a shot.

What is piquing my interest is not only what happens in the next few hours but what will be the political climate for the next president-elect. Washington is already polarized, and there are great challenges facing Congress before the end of the year.

Whoever wins the presidency and the parties that control the House and the Senate need to put the bitterness of this election behind them and work together.

The big question: Can they do that?

Leading CNNPolitics: Controversies dim GOP hopes to take over Senate
Even before a second Republican Senate candidate tripped over incendiary comments about rape, GOP leaders in Washington knew that their once promising chances of winning control of the Senate had diminished. Whether Richard Mourdock of Indiana can move past his controversial remarks and stabilize his campaign remains to be seen. Either way, once confident Republicans across the country now face the nail-biting final days of campaigning and a highly uncertain outcome on Election Day. – Ted Barrett

Leading Drudge: Four More Tears
In a conference call this afternoon, President Barack Obama’s re-election campaign had one central message for their supporters when Election Day arrives tomorrow: They should “keep calm,” even if they hear snippets of information favoring Republican Mitt Romney. – Colin Campbell for the Politicker

Leading HuffPo: Decisions, Decisions
As millions of voters head to their polling places across the U.S., the final round of pre-election polls finds a close race nationwide, but collectively forecasts a narrow victory by President Barack Obama over Republican nominee Mitt Romney in enough battleground states to put Obama over the 270 electoral votes needed for victory. The HuffPost Pollster tracking model created by Stanford political scientist Simon Jackman, which combines all available national and statewide polling data, finds that if polls fall within the historical ranges of polling accuracy, Obama stands a 91 percent chance of victory. – Mark Blumenthal

Leading Politico: Why 2012 turned small
The 2012 election is over at last, and its supporting cast — a complex of operatives and reporters, locked in an embrace of mutual need and mutual contempt, an audience of millions, at once transfixed and repelled — is gasping at the finish line, collapsed in a heap. Eighteen months after the affair got under way with the first Republican primary debate, the country is looking back Tuesday on a campaign of superlatives. Objectively: the most expensive ever, by far. Subjectively: the most garish and debased election of the modern era. – John F. Harris and Jonathan Martin

Leading The New York Times: Costly, Bitter Race Goes to the Voters
And then, they voted. Americans went to the polls on Tuesday to decide whether to give President Obama a second term or to replace him with Mitt Romney after a long, hard-fought campaign that centered on who would heal the battered economy and what role government should play in the 21st century. – Michael Cooper

- It all comes down to this one day, says Obama -
PRESIDENT BARACK OBAMA AT A CAMPAIGN OFFICE IN CHICAGO: “I just want to say how grateful Michelle and I am for all the families, all the communities who have welcomed us, into their homes in some cases, into the neighborhoods, and have, in some cases, worked so hard on our behalf. The great thing about these campaigns is after all the TV ads and all the fund-raising and all the debates and all the electioneering, it comes down to this, one day.”

- Romney: If voters vote on economy, I win -
MITT ROMNEY IN AN INTERVIEW WITH WTAM RADIO IN OHIO: “Well people can see what the results have been in the last four years and frankly that the president's policies have crushed small business. We’re not getting the jobs that we need in this country and my policy is designed to help get jobs growing again in this country and rising take home pay. So if it comes down to economics and jobs, this is an election I should win.”

- Dean: the only way we lose Ohio is by voting irregularities -
HOWARD DEAN, FORMER CHAIRMAN OF THE DEMOCRATIC NATIONAL COMMITTEE, IN AN INTERVIEW ON MSNBC: “I think given the president, given the vote and leading in the polls in Ohio, the only way he can lose is if people are prevented from casting their ballot, either by voting machines that aren’t functioning right or other forms of harassment.”

- McDonnell handicaps what to watch for in Virginia -
VIRGINIA GOV. BOB MCDONNELL, A REPUBLICAN, IN AN INTERVIEW WITH CNN’S STARTING POINT: “I would look for the Beltway counties around Washington, D.C. - Loudoun and Fairfax and Prince William. If Gov. Romney were to win, let’s say, Loudoun County and Prince William County and hold his own and stay close in Fairfax, to me that would be a great signal that he’s going to win the state. And the same with Chesterfield and around Richmond. Those are the bellwether counties that tell us how Republicans are going to do. And that shows us how those independent, undecided voters will break.”

- Blunt Christie slams ‘know-nothing, disgruntled’ Romney staffers -
NEW JERSEY GOV. CHRIS CHRISTIE AT A BRIEFING WITH REPORTERS: “I told Gov. Romney at that time that if the storm landed as predicted that it was going to be catastrophic to New Jersey and unprecedented. I said to him, 'Listen, Mitt, if this storm hits the way I think it's going to, I'm off the campaign trail from here to Election Day.' And he said to me, 'Chris, of course. Do your job, don't worry about me. I'll take care of things.' So all this other noise, I think, is coming from know-nothing, disgruntled Romney staffers who, you know, don't like the fact that I said nice things about the president of the United States. Well, that's too bad for them.”

Jim Acosta (@jimacostacnn)
A busy airport in Cleveland. Romney plane in foreground and AF2 carrying Veep in back. http://instagr.am/p/RsfpZVgucj/

John McCain (@SenJohnMcCain)
Everyone should take a moment to read today: Mark Salter on "A Father's Wishes for a First-Time Voter" http://www.realclearpolitics.com/articles/2012/11/06/a_fathers_wishes_for_a_first-time_voter_116063.html

Since Congress standardized the date of Election Day in 1845 - making it the Tuesday after the first Monday in November - the election has fallen on November 6 six times.

Every time, the Republican candidate has won.

Six elections, six Republicans victories. It should be just a few short hours before we know whether Republicans continue their streak.