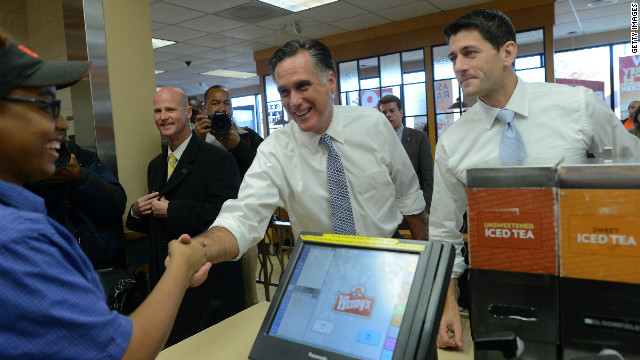 Cleveland, Ohio (CNN) – Mitt Romney and Paul Ryan united in Ohio on Election Day to thank volunteers and pick up lunch at Wendy's.

Tuesday afternoon the presidential running mates arrived on separate campaign planes in Cuyahoga County, which is considered a Democratic stronghold but there are as many Republicans in the most populous county than other conservative parts of the Buckeye State.

Democratic Vice President Joe Biden made his own retail campaign stop in the area at the same time his Republican opponents were there.

Romney and Ryan visited a campaign Victory Center in the Cleveland suburb of Richmond Heights. Before the candidates spoke the presidential nominee let out a loud whistle to get everyone's attention.

Romney began, "Thank you so very much for being here today and for helping people get out to vote. It is critical because this is a big day for big change and we're about to change America to help people in ways they didn't imagine they could be helped – with good jobs and better take home pay."

"The country's been going in the wrong direction the last few years. We're going to steer it back onto a course that's gonna help the American people have a brighter future and I want to thank you," he continued. "We're going to get America back on track. I'm so optimistic, not just about the results of the election, but optimistic about what's ahead for America."

After posing for photos and thanking dozens of volunteers, the two stopped at a nearby Wendy's for lunch.

Romney ordered a quarter-pounder with no cheese, chili and a baked potato, at the fast food chain that was founded in the crucial battleground state.

He said, "We are in your store here and we figured because Wendy's was invented in Ohio, what better place to get lunch than Wendy's, right?"

Romney offered to pay for his running mate, who ordered a side salad with his cheeseburger and French fry combo.

A reporter asked Ryan how he was doing and he replied, "I'm running on fumes."
The GOP standard bearer was asked why he made the visit to Ohio on the last day of the presidential election when people are going to the polls.

"It's an important state. A great state," he said as he walked out.