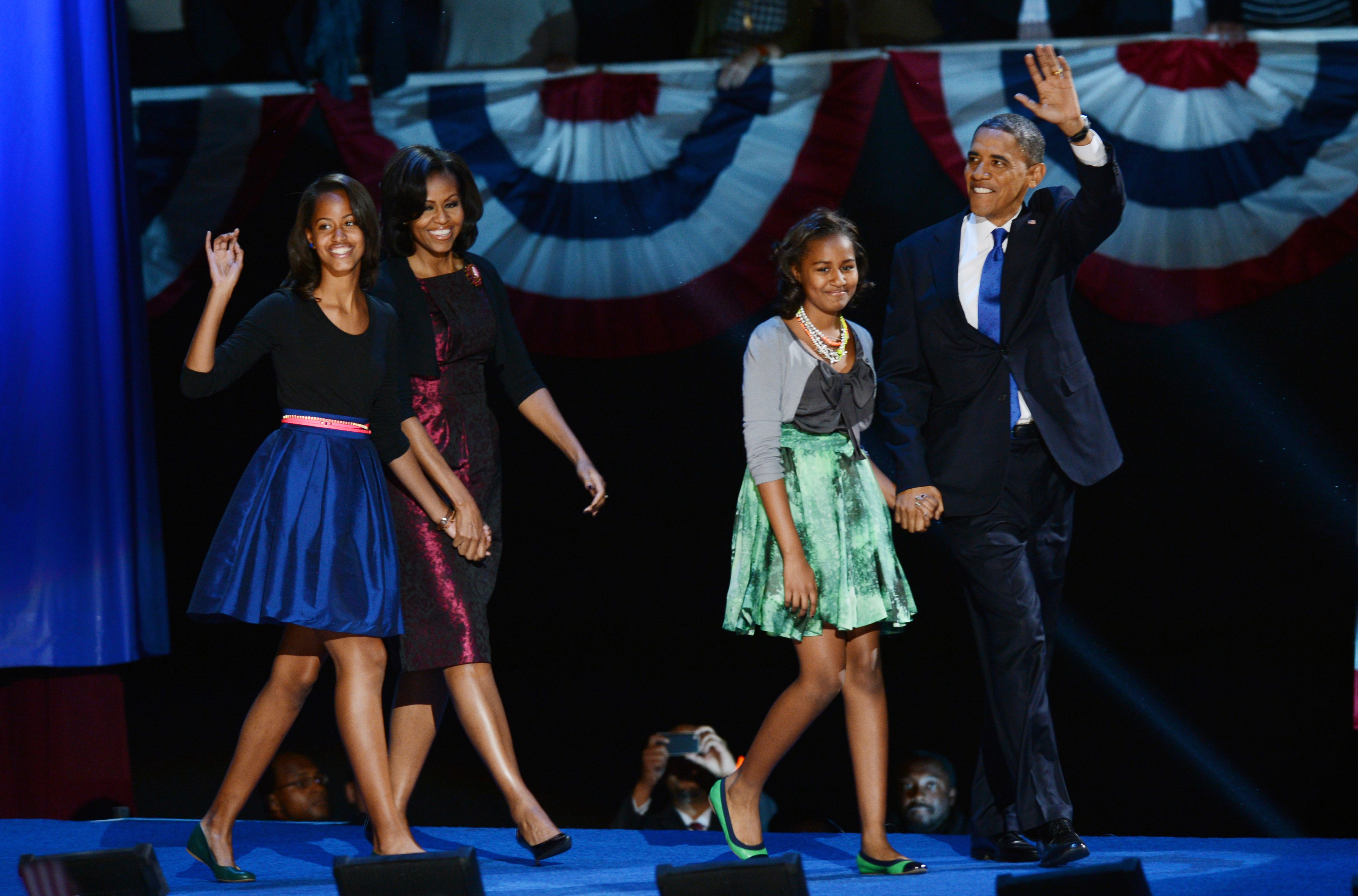 A SIX BILLION DOLLAR STATUS QUO: President Obama stays in the White House, the Senate stays with the Democrats and the Republicans keep the House. … And once all the numbers are added up, some $6 billion could be spent on the election.

DEMOCRATS HOLD SENATE: Key victories in Senate races Tuesday mean Democrats will keep control of the Senate, CNN projects. While poll results were still trickling in for some significant races, the Democratic wins will make it impossible for Republicans to regain control of the chamber. – Ted Barrett

REPUBLICANS HOLD HOUSE: Republicans will maintain a majority in the U.S. House of Representatives, CNN projected Tuesday night as votes were still being tallied for a number of races. While the GOP keeps control, a number of moderates on both sides lost, which is likely to make the House even more polarized. For example, Rep. Larry Kissell, a moderate North Carolina Democrat, lost his bid for re-election, as did Reps. Charlie Bass, R-New Hampshire, and "Bob" Dold Jr., R-Illinois. – Deirdre Walsh

Leading CNNPolitics: Five things Obama must do
Now that the campaign is over and Barack Obama has won a second term, the hard business of governing begins again. There's a presidential inbox waiting and it's not too hard to figure out what's in it. Problems don't have Democrat or Republican stamped on them: they just are. So here are my top five issues facing the president. – Elaine Kamarck

Leading HuffPo: Blue Steel
President Barack Obama was projected the winner of the presidential race over Mitt Romney on Tuesday night. The president scored critical wins in Ohio, Pennsylvania and Wisconsin. While Obama was favored in the swing states going into Election Day, the popular vote between the pair of contenders had remained close for much of the race.

Leading Politico: Obama reelection: Grind-it-out win
Barack Obama has won two presidential elections, but the second victory is the faintest echo of his first. Obama cheated electoral oblivion on Tuesday — in an easier and earlier win than the all-night cliffhanger many pundits had predicted. But this was a tenuous triumph wrested from a reluctant electorate after one of the most bitter presidential races in recent history. – Glenn Thrush

Leading The New York Times: Obama’s Night
Barack Hussein Obama was re-elected president of the United States on Tuesday, overcoming powerful economic headwinds, a lock-step resistance to his agenda by Republicans in Congress and an unprecedented torrent of advertising as the nation voted to give him a second chance to change Washington. – Jeff Zeleny and Jim Rutenberg

Leading CNN Money: World markets react to Obama victory
World markets struggled to find direction Wednesday as U.S. election results left the balance of power in Washington little changed. After an initial decline, Asian markets closed mixed. The Hang Seng in Hong Kong ended up 0.3%, while the Nikkei in Tokyo and the Shanghai Composite dropped by a fraction of a percent. – Charles Riley

- Obama’s Victory Speech -
ON ROMNEY: “I just spoke with Governor Romney and I congratulated him and Paul Ryan on a hard-fought campaign. We may have battled fiercely, but it's only because we love this country deeply and we care so strongly about its future. From George to Lenore to their son Mitt, the Romney family has chosen to give back to America through public service and that is the legacy that we honor and applaud tonight. In the weeks ahead, I also look forward to sitting down with Governor Romney to talk about where we can work together to move this country forward.”
ON BIDEN: “I want to thank my friend and partner of the last four years, America's happy warrior, the best vice president anybody could ever hope for, Joe Biden.”
MORE DETERMINED: “And whether I earned your vote or not, I have listened to you, I have learned from you, and you've made me a better president. And with your stories and your struggles, I return to the White House more determined and more inspired than ever about the work there is to do and the future that lies ahead.”
ON AMERICA: “I know that political campaigns can sometimes seem small, even silly. And that provides plenty of fodder for the cynics that tell us that politics is nothing more than a contest of egos or the domain of special interests. But if you ever get the chance to talk to folks who turned out at our rallies and crowded along a rope line in a high school gym, or saw folks working late in a campaign office in some tiny county far away from home, you'll discover something else. … Democracy in a nation of 300 million can be noisy and messy and complicated. We have our own opinions. Each of us has deeply held beliefs. And when we go through tough times, when we make big decisions as a country, it necessarily stirs passions, stirs up controversy. That won't change after tonight, and it shouldn't. These arguments we have are a mark of our liberty. We can never forget that as we speak people in distant nations are risking their lives right now just for a chance to argue about the issues that matter, the chance to cast their ballots.”

- Romney’s concession speech –
CONGRATULATES AND PRAYS FOR OBAMA: “I have just called President Obama to congratulate him on his victory. His supporters and his campaign also deserve congratulations. I wish all of them well, but particularly the president, the first lady and their daughters. This is a time of great challenges for America, and I pray that the president will be successful in guiding our nation. … Like so many of you, Paul and I have left everything on the field. We have given our all to this campaign. I so wish - I so wish that I had been able to fulfill your hopes to lead the country in a different direction. But the nation chose another leader. And so Ann and I join with you to earnestly pray for him and for this great nation.”
BETS ON BIG RYAN FUTURE: “I want to thank Paul Ryan for all that he has done for our campaign and for our country. Besides my wife Ann, Paul is the best choice I’ve ever made. And I trust that his intellect and his hard work and his commitment to principle will continue to contribute to the good of our nation.”
ON THE FUTURE: “The nation, as you know, is at a critical point. At a time like this, we can’t risk partisan bickering and political posturing. Our leaders have to reach across the aisle to do the people’s work. And we citizens also have to rise to the occasion. … We look to our pastors and priests and rabbis and counselors of all kinds to testify of the enduring principles upon which our society is built - honesty, charity, integrity and family. We look to our parents, for in the final analysis, everything depends on the success of our homes. We look to job creators of all kinds. We’re counting on you to invest, to hire, to step forward. And we look to Democrats and Republicans in government at all levels to put the people before the politics.”

- Republicans call for their own Gut Check -
REPUBLICAN SEN. MARCO RUBIO IN A WRITTEN STATEMENT TO THE PRESS: “The conservative movement should have particular appeal to people in minority and immigrant communities who are trying to make it, and Republicans need to work harder than ever to communicate our beliefs to them. I look forward to working on these goals with my new and returning colleagues in Congress and hope the President will get behind our efforts.”
REPUBLICAN SEN. JOHN CORNYN, CHAIRMAN OF THE NATIONAL REPUBLICAN SENATORIAL COMMITTEE, IN A WRITTEN STATEMENT TO THE PRESS: “But it’s clear that with our losses in the Presidential race, and a number of key Senate races, we have a period of reflection and recalibration ahead for the Republican Party. While some will want to blame one wing of the party over the other, the reality is candidates from all corners of our GOP lost tonight. Clearly we have work to do in the weeks and months ahead.”

- Pro-life group attacks Romney, GOP establishment -
MAJORIE DANNENFELSER, PRESIDENT OF THE SUSAN B. ANTHONY LIST, ATTACKS ROMNEY IN A WRITTEN PRESS STATEMENT: “Barack Obama’s re-election is a tragedy for the country. It is also the latest in a series of missed opportunities for the Republican Party. Voters overwhelmingly disagree with the extreme positions on abortion taken by President Obama and the Democrats. Mitt Romney, the Republican Party, and their Super PAC allies never highlighted this vulnerability, despite the fact that our polling of likely swing voters revealed it to be a persuasive line of argument. What was presented as discipline by the Romney campaign by staying on one message – the economy– was a strategic error that resulted in a winning margin of pro-life votes being left on the table.”

- ‘The coalition of the ascendant’ -
CNN CONTRIBUTOR RON BROWNSTEIN ON THE OBAMA COALITION IN HIS NEW NATIONAL JOURNAL COLUMN: “Obama’s unprecedented effort to reshape the electorate’s composition, boosted by the tailwind of changing demography, also paid off: According to the exit polls, the share of votes cast by minorities increased to 28 percent (just as Obama's campaign manager, Jim Messina, had predicted for months). The president captured an overwhelming 80 percent of those voters, including not only more than nine in 10 African-Americans, but also about seven in 10 Hispanics, and about three in four Asians.”

SOCIAL NETWORK: A simple post from the Obama campaign on its Facebook page, “Four more years.” With a picture of the President and First Lady hugging, has garnered more than 1.9 Million Likes as of press time.
(To put into perspective, the photo of Zuckerberg’s wedding has 1.6 million likes)

Jared Keller (@jaredbkeller)
That was a great concession speech by Mitt. I'm looking forward to seeing what he does next.

David Frum (@davidfrum)
Dick Morris is just a huckster. But George Will & Michael Barone getting map so badly wrong is a warning: GOP no longer knows its country

John Weaver (@JWGOP)
Our party must not only accept marriage equality, but support it. We must be for freedom for everyone.

Nick Confessore (@nickconfessore)
Don't think it's a coincidence that gay marriage advocates made their biggest gains in election where GOP elite quietly dropped the issue.

No correct answers to Gut Check Trivia. Don’t tell me you are all sleeping?