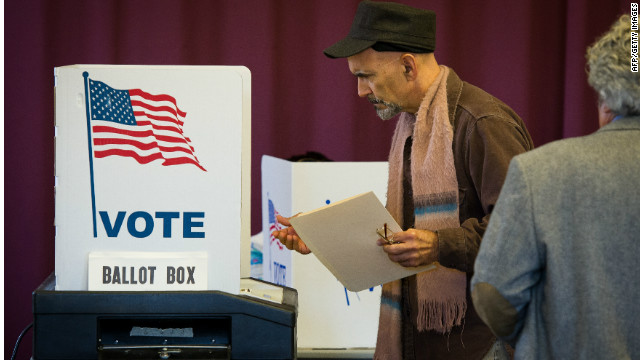 EDITOR'S NOTE: CNN sent dozens of reporters, producers, contributors and correspondents to the key battleground states to cover the final days of the 2012 election. Here CNN Contributor John Avlon's take on how it all shook out:

(CNN) - Over the last two months of the campaign, CNN focused on the swing districts of swing states as a way of looking at who would win the election. From Jefferson County Colorado and Loudon County Virginia on CNN's OutFront's Final Factors, to the Battleground Bus Tour with Ali Velshi from Florida's I-4 Corridor to Ohio's Stark County, we hit the road and talked with swing voters on the ground. In the end, here's how they voted.

Jefferson County, Colorado – President Barack Obama took this busy suburban community to the west of Denver 51% to 46%. It's a reminder of how much the demographics of traditionally Republican, Colorado are changing.

Loudon County, Virginia – This swing county is the fastest growing in the county, with a population that's doubled in the past decade. It also is the wealthiest county in the country, with a local economy impacted by government workers and contractors. Obama beat Mitt Romney here 51% to 47%.

Pinellas County, Florida – While we're still waiting for final Florida totals, it's clear that Obama took the home county of St. Petersburg by 52.2% to 46.7% – across the river in Tampa's Hillsborough County, the margin was slightly wider – 52.8% to 46.2%.

Orange County, Florida – The home county of Orlando was not even close in the end. Buoyed by a non-Cuban Hispanic population and an improving economy, Orange County went for Obama 58.6% to 40.5%. Neighboring Polk County – home to Lakeland – went for Romney, 53% to 46%.

Forsyth County, NC – North Carolina was the one swing state that ended up voting for Romney, but the home county of Winston-Salem ended up edging for Obama 53.2% to 46.9%. It's a general rule – urban areas are voting Democrat.

Stark County, OH – This was a major Buckeye battleground, home to Canton and the Football Hall of Fame. This was the only major swing county on our list that Romney ended up winning albeit by a razor thin-margin – 49.2% to 48.9%, with roughly 600 votes separating them. Obama won the northern neighboring Summit County, home of Akron, by 15 points.

Wood County, OH – This northern Ohio county and its neighbor Lucas County, both went for Obama. Wood County was comparatively close – 51 to 46.8. But Lucas, home to Toledo and the Jeep plant that was the subject of a controversial Romney ad in the final weeks, was a blowout – 64 to 34. In part this was due to strong African-American turnout and an improving local economy – but the Romney Jeep ad also backfired, big time.