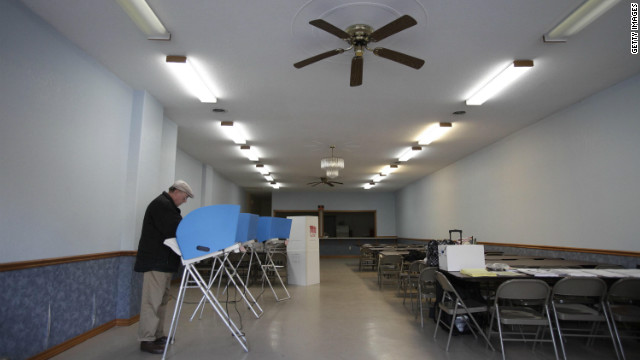 (CNN) – A report estimating the percentage of eligible voters who cast ballots in Tuesday's election shows the rate was lower than in the past two presidential contests, though it surpassed the rate from 2000.

In all states except two (Iowa and Louisiana) the turnout rate was down from four years ago, though six states had higher total numbers of people voting than in 2008: Delaware, Iowa, Louisiana, North Carolina, North Dakota and Wisconsin.

States with the highest turnout rates were all either considered battlegrounds in the presidential election (Wisconsin, Iowa and New Hampshire) or had a high-profile down-ballot contest. In Massachusetts, where Elizabeth Warren and Scott Brown were battling for Senate, 66.6% of eligible voters turned out.

Minnesota's turnout rate of 74.6% was the highest in the nation, and could have been bolstered by the ballot measure there banning same-sex marriage, which failed.

The lowest turnout rate in the nation was in Hawaii, where 43.6% of voters cast ballots, followed by West Virginia, New York, Oklahoma and Texas. All of those states were considered locks for either President Barack Obama or Mitt Romney.

In the report, the writers note that the turnout results are a "one-time setback to the rise in turnout which started with the 2000 election or a return to the slide in participation that began in 1964."

"That question will likely be answered by the 2014 midterm election and the 2016 presidential election," the report said.