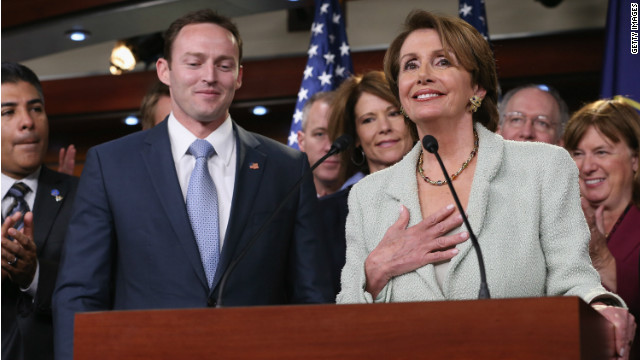 Washington (CNN) - Will she or won't she? Since last Tuesday's elections, speculation has swirled on Capitol Hill about whether House Democratic Leader Nancy Pelosi would run for another term as leader or whether she would step aside.

Pelosi played coy with reporters as Congress returned for the lame duck session, holding a press conference Tuesday with the large group of newly elected Democrats, but then telling the press she wouldn't make an announcement until Wednesday morning.

"I'll see you right here, 10 tomorrow morning. While I love you all very dearly I thought I would talk to my own caucus before I shared that information with you," Pelosi told reporters while she smiled broadly.

But standing in front of the dozens of newly elected members visiting Washington for orientation, Pelosi didn't sound like anyone who was ready to retire from her post.

The California Democrat hailed the group of more than 40 new members who arrived in Washington for freshman orientation as transforming the House Democratic Caucus, saying it's "the first caucus in history – in the history of civilized government - to have a majority of women and minorities in the caucus."

Pelosi herself conceded she fell short of the number of seats she predicted Democrats would win to retake the majority. "We did win 25 seats - we didn't net 25 seats."

Democratic Rep. Steve Israel of New York, the House Democrats' campaign chief, said that when the remaining House races are resolved, Democrats will have increased their numbers by seven to eight seats, but he maintained they achieved their goal of rolling back some of the gains the tea party-backed GOP candidates made when they swept the Democrats out of power in 2010.

"The Republican Caucus, if you look at it, it looks like a rerun of the show 'Mad Men.' Our caucus looks like America," Israel said.

While nothing is certain until Pelosi makes her announcement Wednesday–and she is known to keep her cards very close to her vest–many Democratic aides outside of her office believe Pelosi will keep her post. Two years ago after Democrats lost control of the House, many expected Pelosi to relinquish here leadership role, but she stayed on in the top position.

If she were to step down, the number two House Democrat – Rep. Steny Hoyer of Maryland – would run for the post, and he has broad support from his House colleagues. But it's possible that someone might challenge Hoyer for the job, and it's unclear whom Pelosi would back in that scenario. No one has publicly expressed interest in the top spot, but some speculate that Rep. Chris Van Hollen of Maryland, who is close to Pelosi and is the top Democrat on the House Budget Committee, could be a candidate.

In the event Pelosi steps aside from the leadership position, many expect the number three Democrat, Rep. Jim Clyburn of South Carolina, would run for Hoyer's current post as Democratic Whip, a job he used to do when Democrats controlled the House, but he too could be challenged.

Some Democrats note that the current House leadership is made up of veteran members in their 70s, and without much of a bench of younger members in line for leadership posts there could be a problem for future efforts to retake the majority.