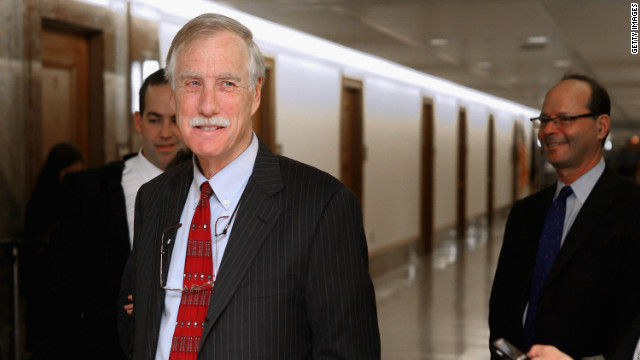 Angus King made the announcement Wednesday in the U.S. Capitol, where he and other newly elected senators and representatives are convening for a week of orientation. They will be officially sworn in as lawmakers in January.

King said discussions with Senate Majority Leader Harry Reid had left him reassured his "independence would be respected," but that Sen. Mitch McConnell, the Republican leader in the Senate, did not reach out to discuss potentially caucusing with the GOP.

Members of both parties expected King to caucus with Democrats, though until Wednesday he had not publicly declared his intentions. He did not say during his campaign which party he would choose.

It was seen as highly unlikely that King would choose to side with Republicans, since the arm of the party responsible for electing members of the GOP to the Senate ran ads against him during the campaign in an attempt to bolster their own candidate. Democrats, who also had a candidate in the race, did not run ads in Maine specifically targeting King.

On Wednesday, King said money from national Republicans played no role in his decision to caucus with Democrats, and that his pick would not bar him from working with Republicans in the future.

"By associating myself with one side, I am not in opposition to the other," King said, noting that with a divided government compromise will be essential.

Speaking after King, Reid said the new member of his caucus "represents the best qualities of what a United States senator should be."

"Number one, he's independent and number two, he's a man of principle. Always has been," the Senate majority leader said.

One Republican, Sen. Susan Collins, held out hope Tuesday her fellow Mainer would join her, saying she'd "love to have Angus King as a member of our Republican caucus." She said whichever party King chooses, the senator would remain independent.

"I am positive he will not be an automatic vote for either caucus, and instead will look at the issues on their merits, and will attempt to reach across the aisle, no matter which side of the aisle he's sitting on," Collins said.

The Senate's other independent member, Sen. Bernie Sanders of Vermont, caucuses with Democrats.

King is a former two-term governor of Maine and will fill the seat of retiring Sen. Olympia Snowe, a Republican. In announcing she would not seek a fourth-term, Snowe decried what she saw as increasing partisanship in Washington.

The 55-seat majority for Democrats in the Senate is a gain of two seats for the party over the last Congress.