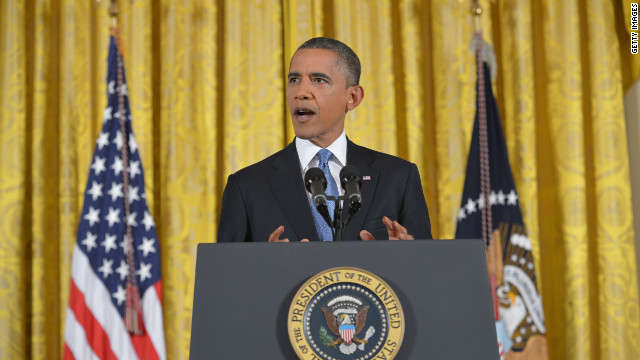 2:22 p.m. ET: Question on Syria's civil war: "The Assad regime (in Syria) has engaged in a brutal crackdown on its people. France has recognized the opposition coalition. What would it take for the United States to do the same? And is there any point at which the United States would consider arming the rebels?"

2:21 p.m. ET: Obama says "We can't attribute any particular weather event to climate change. What we do know that the weather around the globe is increasing faster than was predicted 10 years ago."

2:19 p.m. ET: Question on climate change (a topic that wasn't discussed in depth during the presidential campaign): "In his endorsement of you a few weeks ago, (New York City) Mayor Bloomberg said he was motivated by the belief that you would do more to confront the threat of climate change than your opponent...What specifically do you plan to do in a second term to tackle the issue of climate change, and do you think the political will exists in Washington to pass legislation that could include some kind of a tax on carbon?"

2:17 p.m. ET: Obama says he wants to see a "diplomatic resolution to the problem" of Iran's nuclear ambitions.

"We're not going to let Iran get a nuclear weapon. But I think there is still a window of time to resolve this diplomatically," Obama says, adding that "I can't promise that Iran will walk through the door that they need to walk through."

2:16 p.m. ET: Question on Iran: "Are you preparing a final diplomatic push here to resolve the nuclear program issue and are we headed toward one-on-one talks?"

2:14 p.m. ET: Need some reminders on what's included in the fiscal cliff? Read more from CNNMoney:

What is the fiscal cliff? (VIDEO)

What spending cuts are included in the 'fiscal cliff'?

What's really in the fiscal cliff?

2:12 p.m. ET: Obama, asked if he can image a scenario where the country goes off the fiscal cliff, says "we can all imagine going over the fiscal cliff...if there's too much stubbornness." 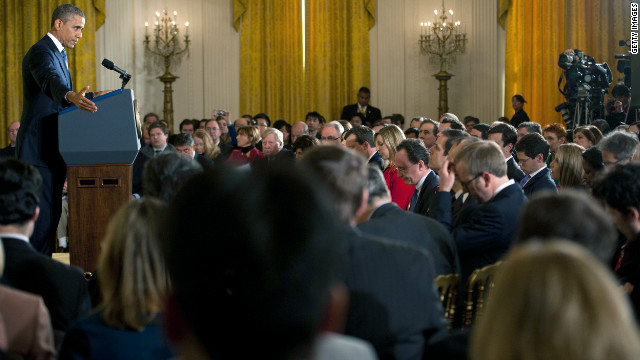 2:07 p.m. ET: Asked a follow up on Benghazi, Obama says he told American security personnel to do "everything they needed" to keep diplomats safe.

2:04 p.m. ET: Obama gets fired up defending his ambassador to the United Nations Susan Rice (who is considered a top choice to replace Hillary Clinton as secretary of state.)

"She has done exemplary work. She has represented the United States and our interests in the United Nations with skill… and grace. As I said before, she made an appearance at the request of the White House in which she gave her best understanding of the intelligence that had been provided before. If Senator McCain and Senator Graham and others want to go after someone they should go after me."

2:01 p.m. ET: Question on the attack in Benghazi, Libya: "Sen. John McCain and Sen. Lindsey Graham both said today that they want to have Watergate style hearings on the attack on the U.S. consulate in Benghazi and said that if you nominate Susan Rice to be secretary of state, they will do everything in their power to block her nomination. Sen. Graham said he simply doesn't trust Amb. Rice after what she said about Benghazi. I'd like your reaction to that. Would those threats deter you from making a nomination like that?"

"It hasn't always manifested itself ... there are probably going to be some very sharp differences."

2:00 p.m. ET: Obama says no meeting is scheduled yet with Mitt Romney, but says he still hopes to work with the former GOP nominee in the future. Obama praised Romney for his running on the 2002 Salt Lake City Olympics.

1:59 p.m. ET: Next questioner asks: "On election night you said that you were looking forward to speaking with Governor Romney, sitting down in the coming weeks to discuss ways that you could work together on this nation's problems. Have you extended that invitation? Has he accepted? And what ways do you think you can work together?"

"That's not realistic. So we're going to have to compromise."

1:57 p.m. ET: Obama answering a question now on the fiscal cliff. Is there no deal if tax rates aren't increased?

1:55 p.m. ET: Obama says on the timing of his Petraeus knowledge: "I am withholding judgment with respect to how the entire process surrounding General Petraeus came up. We don't have all the information yet, but I want to say that I have a lot of confidence generally in the FBI and they have a difficult job. It is also possible that had we been told, that you would be sitting here asking why are you interfering in a criminal investigation."

1:54 p.m. ET: Another question on the Petraeus scandal: Do you believe you should have known sooner about the investigation?

"Some conversations are already starting to take place among senators, congressmen, and my staff."

1:49 p.m. ET: Question on immigration reform: "On immigration reform, the criticism in the past has been that you did not put forth legislation with specific ideas and send it up to the Hill. This time around you have said again that this would be one of the top priorities for a second term. Will you then send legislation to the Hill? Exactly what do you envision is broad immigration reform? Does that include a legalization program. Also, what lessons of any did Democrats learn from this last election and the Latino vote?"

1:48 p.m. ET: Obama: "There is a package to be shaped and I am confident that folks of goodwill in both parties. But what I'm not going to do is extend [the] Bush tax cuts for the wealthiest two percent that we can't afford and according to economists will have the least positive impact on the economy."

1:45 p.m. ET: Yellin follows up: Would closing loopholes as a way of raising revenue be a satisfactory compromise?

This is a solution House Speaker John Boehner has floated: Read more here.

1:43 p.m. ET: Question from CNN chief White House correspondent Jessica Yellin: "You said you wouldn't extend the Bush era tax cuts but at the end of the day, you did. So respectfully sir, why should the American people and the Republicans believe that you won't cave again this time?"

1:41 p.m. ET: Obama uses part of his answer to praise Petraeus for his long military career: "I do want to emphasize what I said before. General Petraeus had an extraordinary career. … By his own assessment he did not meet the standards that he felt were necessary as director of the CIA. … We are safer because of the work that David Petraeus has done. … this ends up being a single side note on what has been an extraordinary career."

1:39 p.m. ET: Question on the Petraeus affair: "Can you assure the American people that there have been no breaches of national security or classified information in the scandal involving Generals David Petraeus and Allen? And do you think that you as commander in chief and the American people should you have been told that the CIA chief was under investigation before the election?"

1:37 p.m. ET: Obama is injecting some urgency in his push for a resolution to the fiscal cliff: "We should not hold the middle class hostage while we debate tax cuts for the wealthy. We should at least do what we agree on, which is to keep middle class tax rates low."

1:36 p.m. ET: Obama: "As I've said before I'm open to compromise and I'm open to new ideas and I've been encouraged this week to hear Republican after Republican expressing their openness to more revenue."

1:35 p.m. ET: Obama said the American economy "is still recovering" and that his priority as president "has to be jobs."

1:34 p.m. ET: The president walked out to the podium and is beginning his opening statement.

1:33 p.m. ET: Wolf Blitzer offers an insight from his days as a White House correspondent: the president will have a list of reporters he'll call on in preparation for today's news conference.

1:27 p.m. ET: Reporters, including CNN's Jessica Yellin, are reporting live from the East Room of the White House, where Obama's press conference is scheduled to begin in minutes. 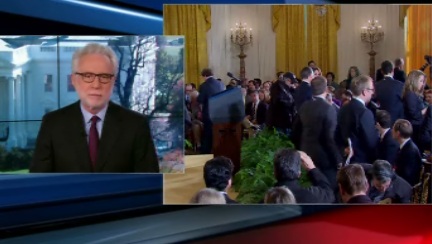 1:25 p.m. ET: In preparation for negotiations over the fiscal cliff, Obama met with leaders of labor groups on Tuesday at the White House.

1:22 p.m. ET: CNN's panel is discussing why Obama wasn't notified of the FBI investigation into David Petraeus ahead of his resignation.

1:17 p.m. ET: What else could come up during today's news conference? Aside from the Petraeus scandel and the fiscal cliff, the attack in Benghazi, Libya will likely be a topic of discussion. The president hasn't held a full-blown news conference since the attack on Sept. 11, 2011 that left four Americans dead.

1:14 p.m. ET: Ali Velshi is explaining the "fiscal cliff" on CNN right now - it's the large package of budget cuts and tax increases that would go into effect at the beginning of next year if Congress and Obama can't strike a deal on reducing the federal debt.

Click here for a primer on what's included in the fiscal cliff.

1:06 p.m. ET: Following today's press conference, the president will meet with business leaders to discuss the upcoming fiscal cliff. He met with labor leaders on Tuesday.

1:02 p.m. ET: Chief White House correspondent Jessica Yellin reports the president will take eight questions during his news conference, which is set to begin at 1:30 p.m. and last one hour.