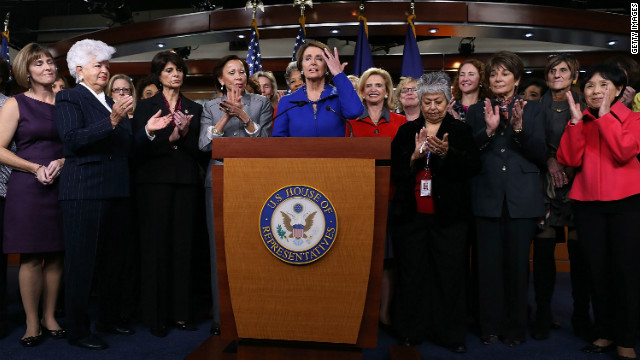 Washington (CNN) - After keeping colleagues and most of her aides in the dark about her post-election plans for more than a week, House Democratic Leader Nancy Pelosi finally told House Democrats she intended to run again for her post. The official vote isn't until after Thanksgiving, but Pelosi will likely get overwhelming support from her colleagues.

After Pelosi revealed her plans at a closed-door caucus meeting on Wednesday, House Democrats cheered loudly and chants of "two more years" erupted in the room, according to several sources in attendance.

At a post-meeting news conference, Pelosi stood among dozens of female House Democrats, including members who won re-election and those newly elected last week, and noted the record numbers of women elected in 2012, saying, "this picture is worth millions of votes."

The California Democrat emphasized repeatedly that having a female voice in a top position in Congress and increasing the ranks of women in Congress were major factors playing into her decision to stay.

"For some people in the general public, the thought of four men at that table was not an appealing sight," Pelosi said, alluding to the top congressional leadership posts all being filled by men, but then she quickly added, "however excellent they may all be."

Ever since Pelosi became the first female House speaker in 2007 and "shattered the marble ceiling" - as she frequently said at the time - she stressed an agenda of policy proposals that she hoped would empower women. An aide close to Pelosi noted that on the same date 10 years ago, Pelosi was the first woman elected to lead a political party in Congress.

In deciding to remain as Democratic leader for another term she made it clear she thought she had more work to do on behalf of women. "I'm not satisfied – we want more," she said.

The lead up to her announcement became one of Capitol Hill's biggest post-election guessing games – reporters asking aides, other Democratic leaders, as well as rank and file members and all getting virtually the same answer over and over – no one knew. Many had theories, but admitted they had little real information.

Even those who talked directly to Pelosi about it said she was keeping her own counsel. It was a repeat of a similar episode two years ago when Democrats were swept out of power and Pelosi considered whether she would stay on. She surprised most political observers when she decided to run for the top position of the House Democratic Caucus after her biggest accomplishments – health care and the stimulus – were rejected by voters.

Pelosi told reporters she made her final decision on Tuesday, after talking with colleagues and her family. She said her children encouraged her to stay, while her brother Tommy, who is a former mayor of Baltimore, wasn't as enthusiastic.

In a sign of how closely held the decision was, a longtime aide to Pelosi told CNN that the Democratic leader's own staff didn't know for sure what she would say until she spoke at the morning caucus meeting. Multiple Democrats entering the meeting asked reporters what they had heard.

Rep Steny Hoyer, the No. 2 House Democrat who was in line for the top post if Pelosi opted to step down from leadership, told CNN that he learned of Pelosi's intentions Wednesday morning, before Pelosi shared them with the full caucus. He said he wasn't surprised, "I think most people expected her to stay." On Wednesday, Hoyer announced he would run again for his current post of Democratic whip, one he's expected to retain with broad support.

Despite falling short of her goal to recover 25 House seats from Republicans and retake control of the House in last week's election, Pelosi argued Democrats still won because they added to their overall numbers in the House and the country re-elected President Barack Obama, a Democrat. "From the standpoint of victory in the polls I wouldn't think of walking away," she said.

Maryland Democratic Rep. Elijah Cummings told reporters that it was important to have a female in a leadership role after women's issues were such a flashpoint in the presidential election and with more female members getting elected to Congress. But he also said Democrats wanted Pelosi's influence in upcoming talks on major issues like the fiscal cliff.

"I think she will play a crucial role in bringing a progressive role to all of these negotiations. I think a lot of people were concerned, and they want to make sure that voice has heard and hers is one that has been so effective over the years," Cummings said.

Pelosi insisted wielding power from a leadership post in the minority party "was no problem at all." Citing Obama's re-election and losses among some of the Republicans that swept Democrats out of power in 2010, she said this tenure in the post as Democratic leader would be better than her time in the job over the past two years.

"It's better than the last term. The anti-government ideologues – some of them are gone and that message has largely been rejected by the American people," Pelosi said.