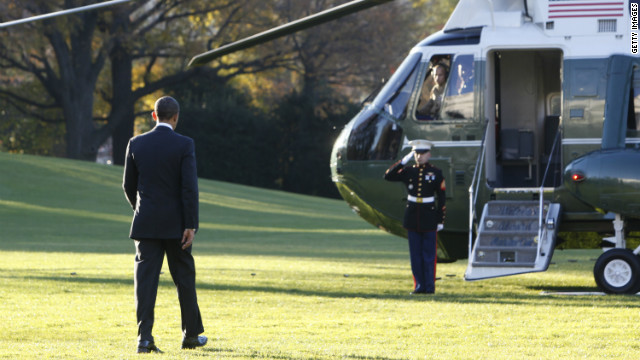 (CNN) – A national security adviser to President Barack Obama reaffirmed on Saturday the administration’s support for Israel’s “right to defend itself” as violence raged on the border between Israel and Gaza.

“We believe that the precipitating factor for the conflict was the rocket fire coming out of Gaza,” said Ben Rhodes, Obama’s deputy national security adviser. “We believe that Israel has a right to defend itself and will make its own decisions about the package that they use in that regard.”

Rhodes said Israel has not asked the United States to provide logistical, material or military support, but that Obama has spoken daily with Israeli Prime Minister Benjamin Netanyahu since this spate of violence broke out. He also has been in touch with other leaders in the region, as has Secretary of State Hillary Clinton, Rhodes said.

More than 400 rockets have hit Israel since Wednesday, the Israeli Defense Forces said, and the military wing of Hamas has claimed responsibility for attacks, including one on Tel Aviv. While the Palestinian government is dominated by the Fatah movement, Israel has said that the Hamas presence is a “front-line base” for their adversary Iran. Palestinians say they are responding to airstrikes which kill civilians.

“We wouldn’t comment on specific targeting choices by the Israelis other than to say that we of course always underscore the importance of avoiding civilian casualties,” Rhodes told reporters on Saturday.

Israel has authorized the activation of as many as 75,000 reservists and is amassing troops, tanks and other armored vehicles along the border, raising questions about a possible ground invasion of Gaza.

“Israel is going to make choices about its own military operations, and we respect their right to self defense and the fact that they’re going to need to take certain actions when there are rockets being fired at their citizens from Gaza,” Rhodes said.
He spoke aboard Air Force One as the president embarked on a history-making, three-day trip to Asia. Obama will become the first U.S. president to visit Myanmar, also known as Burma, and also will make stops in Thailand and Cambodia for the East Asia Summit.

In his visit to Myanmar, Rhodes said, “the president’s message when he goes is going to be one of welcoming the progress that has taken place, noting the truly historic developments that we’ve seen over the course of the last year, but also underscoring that more work needs to be done to ensure a full transition to civilian rule to ensure a full transition to democracy, and to bring about national reconciliation.”

He noted the country’s moves to increase political, labor and media freedoms, including the release of hundreds of political prisoners this year.

“That said, the transition to democracy is far from complete in Burma,” he said.