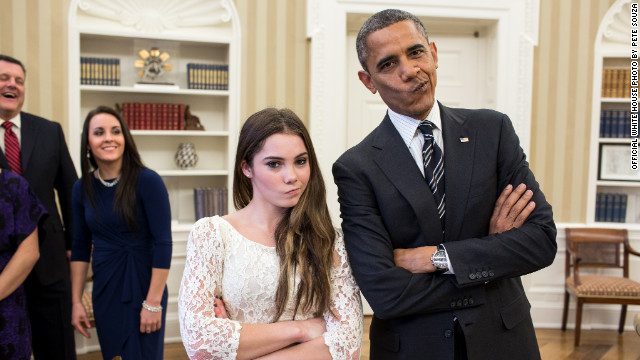 "Did I just do the Not Impressed face with the President..?" Maroney, who won an individual silver medal, tweeted afterward.

During the medal ceremony Maroney was caught with the now-famous unimpressed face which quickly went viral sparking tumblrs and memes of Maroney's face. After the London Olympics, the gymnast told CNN's Soledad O'Brien, "You just have to laugh at what happens."

"Everything happens for a reason and you just have to turn it into something positive," she said about the attention her expression received after the ceremony.

While in the thick of campaign season in August, Obama, an avid watcher of the Olympics, applauded both gold medal swimmer Michael Phelps and the "Fierce Five" women’s gymnastics team for their outstanding performances in London while he and his campaign stumped in the political battleground of Ohio.

"These gymnastics folks - I don't understand how they do what they do," Obama told supporters at a campaign rally after he had spoken by phone from Air Force One to all five members of the team. "So I told these young ladies as I was congratulating them, how do you not bust your head every time you're on that little balance beam? I couldn't walk across that balance beam."