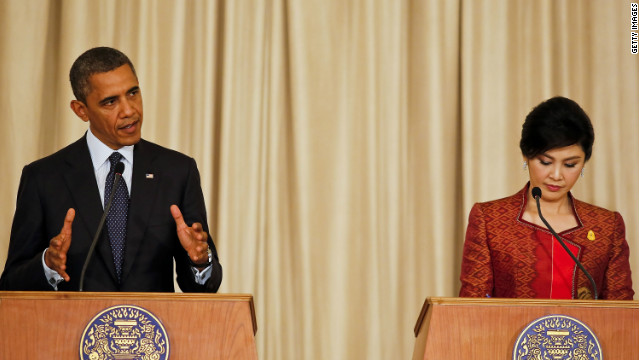 Bangkok, Thailand (CNN) - President Barack Obama said Sunday he is open to any positive thoughts over the ongoing budget negotiations, whether they come from prayer or vibes.

"I always believe in prayer. I believe in prayer when I go to church back home," Obama said at a press conference in Bangkok. "if a Buddhist monk is wishing me well, I’m going to take whatever good vibes he can give me to try to deal with some challenges back home."

At a stop earlier in the day, Obama jokingly told a monk, "We're working on this budget; we're going to need a lot of prayer for that."

"Democracy's a little messier than alternative systems of government, but that's because democracy allows everybody to have a voice," Obama said. "That system of government lasts, and it's legitimate. And when agreements are finally struck, you know that nobody's being left out of the conversation - and that's the reason for our stability and prosperity."

The president is on a three-day, three-country swing through Asia that will include the first-ever visit to Myanmar by an American president and conclude with the East Asia Conference in Cambodia. His first post-election overseas trip is intended to demonstrate Asia's economic importance, ensure positive Democratic steps continue, and reinforce actions taken during the last four years.

"Asia is my first foreign trip since our election in the United States and Thailand is my first stop - and this is no accident," Obama said Sunday. "As the fastest-growing region in the world, the Asia Pacific will shape so much of our security and prosperity in the century ahead, and it is critical to creating jobs and opportunity for the American people."