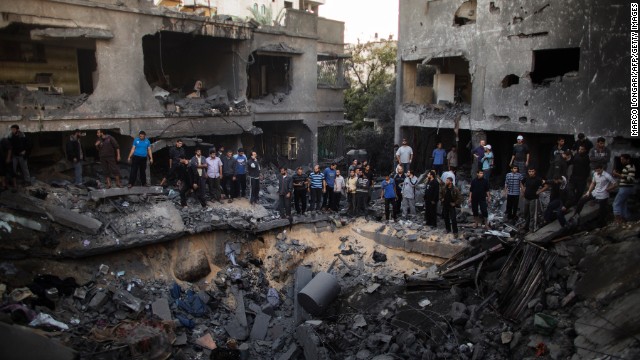 HAPPENING NOW: As the violence continues in Israel and Gaza, CNN’s Wolf Blitzer is in Jerusalem, where he will anchor “The Situation Room” this week. Blitzer described Ashkelon, Israel, a town just north of the Gaza border as “eerie” as the cafés and beaches are deserted. As soon as he arrived, there was a series of loud booms, air raid sirens went off and soldiers rushed Blitzer and others to a bomb shelter. … Today Blitzer interviews former British Prime Minister Tony Blair, Israel Defense Forces spokeswoman Avital Leibovich and Israeli Government spokesman Mark Regev. Frederik Pleitgen and Christiane Amanpour report from Israel, and Anderson Cooper, Arwa Damon and Ben Wedeman report from Gaza City.

DEVELOPING: GUT CHECK ON MEDIA COVERAGE: New Pew Research report says “more Americans say they followed the debate over the ‘fiscal cliff’ very closely than the investigations into the Libya embassy attack, renewed violence in the Middle East or the FBI investigation that led to David Petraeus’s resignation as CIA Director. … Nearly identical percentages of Republicans (36%) and Democrats (35%) say they followed the debate over the automatic spending cuts and tax increases that will take effect at the beginning of next year unless the president and Congress act. Republicans also are about as interested as Democrats in the Petraeus investigation (28% vs. 21%). But there is a wide partisan gap in interest in another major story of the week: Republicans (42%) are much more likely than Democrats (21%) or independents (22%) to say they followed the investigation into the September attack on the U.S. embassy in Benghazi, Libya very closely.” FULL REPORT

TRAIL TRIVIA
(Answer below)
President Barack Obama became the first sitting president to visit Myanmar today – the 25th trip of his presidency. Where did he go for his first?

As the Israel-Gaza conflict continues for a sixth day, we are struck by the ground-breaking propaganda war. Our colleague John Sutter wrote a provocative piece entitled, “When war is pre-packaged for sharing.”

Among the insights that caught our eye were that official military accounts were using sophisticated social techniques to galvanize public opinion.

Here are two examples. One from Israel:

IDF (@IDFSpokesperson)
What would you do if rockets were striking your country? RT if you agree that #Israel has the right to self-defense. pic.twitter.com/mNfY0Smx

And another from Hamas:

Sutter points out that these tweets emphasize the viral nature of their front:

Notice that both sides want Internet users to "share this" or "share now." That's a new concept for militaries that are engaged in active conflict, writes Matt Buchanan for BuzzFeed.

"Unlike any propaganda machine before it, it's inherently viral. It's designed to spread," he wrote. The IDF's tweets "are a mixture of documentation, saber rattling, sober reminders of the reality of war, and upbeat updates on the advanced state of its technology. All delivered direct to you. Please RT."

The question we have now is whether this new aggressive propaganda war will add intensity and impatience in a conflict that mandates nuance and deeper discussion.

Leading CNNPolitics: Obama lauds Aung San Suu Kyi, gives a nod to Myanmar
Barack Obama became the first sitting U.S. president to visit Myanmar on Monday, praising the courage of fellow Nobel Peace Prize winner Aung San Suu Kyi while also providing a symbolic nod to initial reforms in a nation once notorious for political repression. Later, Obama traveled to Cambodia for a summit of regional leaders and held what an aide called a "tense" meeting with the host country's prime minister that emphasized the need for improving human rights there.

Leading Drudge: Bring Back The 91% Tax Rate
The ’50s — the Twinkie Era — do offer lessons that remain relevant in the 21st century. Above all, the success of the postwar American economy demonstrates that, contrary to today’s conservative orthodoxy, you can have prosperity without demeaning workers and coddling the rich. – Paul Krugman

Leading HuffPo: What On Earth – Rubio To Science: Drop Dead
Sen. Marco Rubio (R-Fla.) isn't qualified to answer a question about how old the earth is, he told GQ in a recent interview. “I'm not a scientist, man. I can tell you what recorded history says, I can tell you what the Bible says, but I think that's a dispute amongst theologians and I think it has nothing to do with the gross domestic product or economic growth of the United States,” Rubio told GQ's Michael Hainey. “I don't think I'm qualified to answer a question like that. At the end of the day, I think there are multiple theories out there on how the universe was created and I think this is a country where people should have the opportunity to teach them all.”

Leading Politico: Republicans at a crossroads
Republican governors are torn between essentially staying the course in the wake of Mitt Romney’s loss and a more proactive strategy aimed at radically shaking up their party in an effort to reach out to young and minority voters. Some governors believe that Romney’s loss two weeks ago to President Barack Obama was just that — a loss by a single candidate who ran a defensive campaign pummeled by negative ads and lacking in vision. They advocate sticking to a tried-and-true formula of running their own races and hewing to local instead of national dynamics. – James Hohmann

Leading The New York Times: Hamas Leader Dares Israel to Invade Amid Gaza Airstrikes
The top leader of Hamas dared Israel on Monday to launch a ground invasion of Gaza and dismissed diplomatic efforts to broker a cease-fire in the six-day-old conflict, as the Israeli military conducted a new wave of deadly airstrikes on the besieged Palestinian enclave, including a second hit on a 15-story building that houses media outlets. A volley of rockets fired from Gaza into southern Israel included one that hit a vacant school. – Fares Akram, Jodi Rudoren and Alan Cowell

- Retiring Snowe: ‘I told you so’ -
REPUBLICAN SEN. OLYMPIA SNOWE OF MAINE IN AN INTERVIEW WITH CNN: “I'd rather not have been in the position ‘I told you so,’ because for many years I had been arguing that we had to work in the middle and that we had to appeal to women and to minorities. And obviously that didn't happen. And as a result, we're in a situation that we're in today where we lost dramatically in this last election. So the Republican Party will have to be introspective. They're going to have to begin to review their approaches and understand we need to return to our roots, for example, to fiscal responsibility. I wish we had, you know, had initiated and driven the balanced budget amendment when we were in control of both branches.”

- How old do you think the Earth is? Rubio says it’s a theological debate… -
REPUBLICAN SEN. MARCO RUBIO OF FLORIDA IN AN INTERVIEW WITH GQ: “I'm not a scientist, man. I can tell you what recorded history says, I can tell you what the Bible says, but I think that's a dispute amongst theologians and I think it has nothing to do with the gross domestic product or economic growth of the United States. … Whether the Earth was created in 7 days, or 7 actual eras, I'm not sure we'll ever be able to answer that. It's one of the great mysteries.”

- … and he also gives props to Eminem -
REPUBLICAN SEN. MARCO RUBIO OF FLORIDA IN AN INTERVIEW WITH GQ: “The only guy that speaks at any sort of depth is, in my mind, Eminem. He's a guy that does music, that talks about the struggles of addiction and before that violence, with growing up in a broken family, not being a good enough father.”

- Democratic congressman bemoans conspiracy theories persisting after Petraeus testimony -
REP. ADAM SCHIFF (D-Calif.) IN AN INTERVIEW WITH CNN: “We also learned from General Petraeus that in the putting together of these talking points, there was no effort to politicize them, no effort to spin them, no interference from the White House, and you would think that that would have ended the conspiracy theories that continue to be propagated, but, unfortunately, it hasn't, and my concern is, frankly, we're taking our eyes off the ball which really ought to be the hunt for those who were responsible, tracking them down, and bringing them to justice.”

- GOP resolute in opposition to Susan Rice -
A LETTER TO PRESIDENT BARACK OBAMA FROM 97 REPUBLICAN MEMBERS OF THE HOUSE: “We, the undersigned, are deeply troubled by your recent comments that you are considering Ambassador Susan Rice to succeed Hillary Clinton as Secretary of State. Though Ambassador Rice has been our Representative to the U.N., we believe the misleading statements over the days and weeks following the attack on our embassy in Libya that led to the deaths of Ambassador Stevens and three other Americans caused irreparable damage to her credibility both at home and around the world.”

- Obama revisits first inaugural in Myanmar speech -
PRESIDENT BARACK OBAMA AT THE UNIVERSITY OF YANGON IN MYANMAR: “When I took office as president, I sent a message to those governments who ruled by fear: ‘we will extend a hand if you are willing to unclench your fist.’ And over the last year and a half, a dramatic transition has begun, as a dictatorship of five decades has loosened its grip. Under President Thein Sein, the desire for change has been met by an agenda for reform. A civilian now leads the government, and a parliament is asserting itself. The once-outlawed National League for Democracy stood in an election, and Aung San Suu Kyi is a Member of Parliament. Hundreds of prisoners of conscience have been released, and forced labor has been banned. Preliminary cease-fires have been reached with ethnic armies, and new laws allow for a more open economy.”

What's the chance that Romney gives a speech at the 2016 GOP convention? 0%, right?

People reacting negatively to Marco Rubio giving a good interview should probably just not help us pick candidates in the future.

Sanchez: "Some GOP cands consciously avoid targeting Hispanics too aggressively, lest they actually turn out to vote." tinyurl.com/d5p4kll

Morgan: "What do you say to Palestinians watching this, living without hope?" Peres: "Do two things: Stop shooting, start talking."

President Barack Obama’s trip to Southeast Asia – including the first trip ever by a sitting president to Myanmar – marks the 25th trip of his presidency.

On February 19, 2009, less than a month after the inauguration, Obama visited Ottawa to meet with Canadian Prime Minister Stephen Harper. The slated topics for the meeting were trade and the environment.

Harper spoke that day and revealed that the two leaders agreed to “a new initiative that will further cross-border cooperation on environmental protection and energy security.”

In a separate speech Obama said, “How we produce and use energy is fundamental to our economic recovery, but also our security and our planet. And we know that we can't afford to tackle these issues in isolation. And that's why we're updating our collaboration on energy to meet the needs of the 21st century.”

The trip was short – Obama spent around 8 hours in Canada.