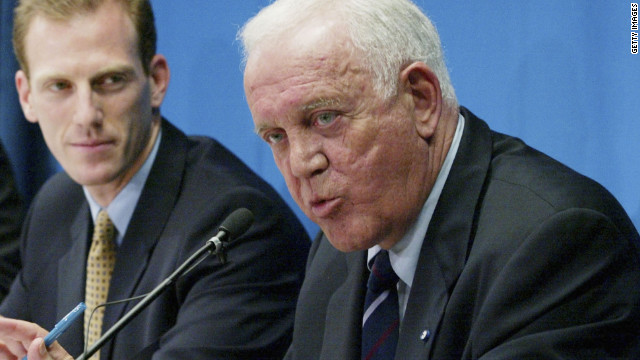 Known as a centrist, Rudman was elected to the Senate in 1980 and served for two terms until 1993. Following his tenure on Capitol Hill, Rudman practiced law in Washington, D.C., where he was appointed by former President Bill Clinton to the president's Foreign Intelligence Advisory Board.

In that capacity, he was co-chairman, along with former Democratic presidential candidate Gary Hart, of the U.S. Commission on National Security, which called for the creation of a homeland security department in 2001, six months prior to the September 11th attacks, according to Albright Stonebridge Group, a global strategy firm chaired by Rudman and founded by former Secretary of State Madeleine Albright.

The White House released a statement from President Barack Obama saying he and first lady Michelle Obama send their thoughts and prayers to the late senator's family.

With Rudman's passing, the president said, the "United States has lost a decorated war veteran and one of our country's great public servants."

"Over almost 20 years representing the people of New Hampshire – first as Attorney General and then in the Senate – Warren was the embodiment of Yankee sensibility and New England independence," he continued. "And as we work together to address the fiscal challenges of our time, leaders on both sides of the aisle would be well served to follow Warren's example of common-sense bipartisanship."

"A man is incomparably lucky to have had a friend that close who stood for what the Founders of the American republic staked its future on," he said in a statement. Rudman played an instrumental role in Souter's appointment to the high court.

Rudman was a life-long resident of New Hampshire and obtained a Bachelor of Science degree from Syracuse University in 1952. He served in the U.S. Army as a combat platoon leader and company commander during the Korean War, according to the Concord Coalition, a non-profit fiscal policy group that was founded and co-chaired by Rudman.

Following his time in the war, Rudman earned his law degree from Boston College Law School and began his career in Nashua, New Hampshire, where he was later appointed as attorney general for the state.

Rudman passed away at George Washington Hospital. He is survived by his wife, Margaret Shean Rudman, who resides in Washington, D.C. He is also surved by his daughter Laura Rudman Robie, his daughter and son-in-law Debra and Dan Gilmore, three grandchildren and two sisters.